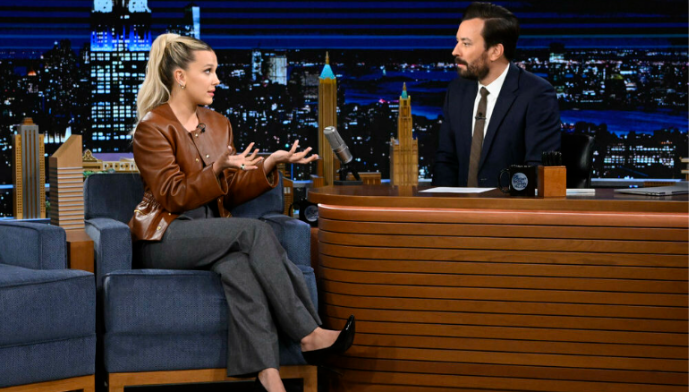 Millie Bobby Brown loves animals. Fans have seen how she has got a lot of pets over the years, as she likes to spend time with them. She believes that it is impossible to harm animals, because they are the same living beings as we are. The young actress is a vegan, and she even made her cosmetics brand Florence by Mills without cruelty. The 18-year-old star has a clear priority: it will not allow animals to suffer in the manufacture of products.

Her love for animals is obvious, as we recently saw her bring her dog Vinnie to the set of Allure. In addition, she talks to her turtles every morning when she leaves for filming. But it seems that Brown has a new friend with whom she spends most of her time. The famous mother of turtles switched sides when Jimmy Fallon showed her a photo with rabbits.

Millie Bobby Brown takes her pet rabbit everywhere with her

Millie Bobby Brown visited The Tonight Show with Jimmy Fallon to promote her movie Enola Holmes 2. In the episode, the host showed a photo of Millie and her pet named Eeyore. The photo was from the filming of Enola Homes 2, and the actress was wearing her character’s clothes. Then he showed another picture of Vinnie and Bunny sleeping together in bed. It looked really charming!

The star of the TV series “Stranger Things” called her rabbit a “genius” and said that he makes a buzzing voice when he is happy. Moreover, she added that she was buzzing, if he wanted to go to work with her, then she was taking him.

“I pick him up, put him in a stroller, push him onto the set, and it’s, like, a better life,” Millie said. Moreover, the actress takes him with her everywhere, and the rabbit is currently her best friend of all her pets.

Meanwhile, her best friend Noah Schnapp also recently revealed in a gaming session with Jimmy Fallon that the British star is obsessed with animals. Well, fans can see her love for pets as she continues to add new ones to her family. Enola Holmes 2 is ready to be released on the streaming giant on November 4. Counting the days? Put a notification on the sound so as not to miss all the adventures of Enola that will soon appear on your way.

What do you think of Millie Bobby Brown as this beloved person? Share your opinion with us in the comments section.

Looking for a sister-wife: why fans are outraged by Nick’s behavior