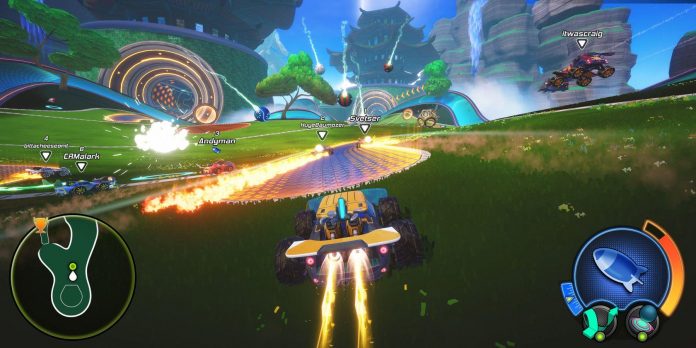 The release of Turbo Golf Racing in early access caught the Xbox Game Pass by surprise. A wonderful game combining Rocket League-style sports battles with golf at breakneck speeds has been available for more than a week and is gathering a healthy audience, judging by rumors. Developer Hugecalf Studios is committed to maintaining this Xbox Game Pass momentum and has already released a substantial Turbo Golf Racing update. However, this is not all, as Turbo Golf Racing has also received a roadmap, which outlines significant additions to the game for the coming year.

While Turbo Golf Racing already has the bulk of the content available at launch in early access, Hugecalf has big ambitions for the game. Over the next 12 months, the main features will significantly expand the name. The new roadmap breaks down these plans into a list of common game modes, features, and other content. The roadmap is divided into three areas. First, the recent patch from August 12, then what is “Coming Soon” and what is planned for the next few months, and finally, features are “On the horizon”.

The “Coming Soon” section of the roadmap presents content for Turbo Golf Racing, which is being actively worked on. Key additions in this section include global leaderboards, private lobbies, cross-platform parties and an improved quest system. There are also content-oriented add-ons, such as what players expect from a live-service style of play. These additions include new levels, a new biome and the 2nd season of early access.

“On the Horizon” are three key additions, as well as the promise of much more. The biggest addition, of course, is the rating mode. This is something that players will be happy to see in the game, so we hope Turbo Gold Racing will add it sooner rather than later. Hugecalf will also add in-game statistics, with which players will be able to analyze their gameplay, as well as new pickups.

While the roadmap may be a little sparse in details, with no solid release windows, Hugecalf hopes his efforts so far show that he is worth trusting in the future. Having launched Turbo Gold Racing on August 4, Hugecalf has already released a useful patch with 6 new levels, a Whippy car, two power cores, 10 more cosmetic items to collect and various bug fixes.