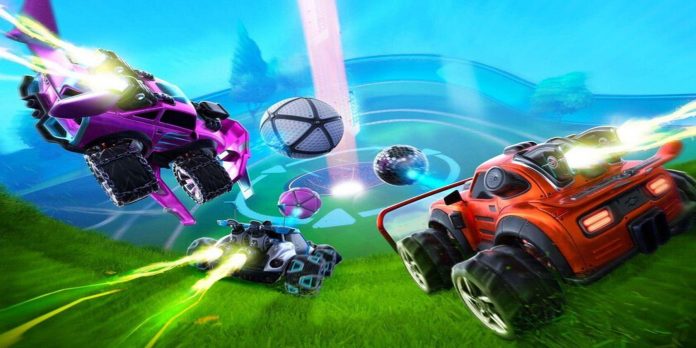 Given the dizzying success and popularity of Rocket League, the appearance of a new version of the racing sports genre was only a matter of time. It is assumed that Turbo Golf Racing will become just such a game, with a characteristic style and gameplay reminiscent of its predecessor. Developed by Halfcalf Studios and expected to be released later this year on PC and Xbox platforms with Xbox Game Pass available, Turbo Golf Racing may well become a contender on the esports scene thanks to its attractive formula and high-octane actions.

At first glance, the game looks like the spitting image of Rocket League, which forces many online to make comparisons between them, but while Rocket League follows seasonal releases of new content and focuses on player competition, Turbo Golf Racing is set up to deliver a generally different racing experience. Including real racing gameplay with obstacles on the track and bonuses familiar to the kart racing subgenre, it would actually be more appropriate to describe Turbo Golf Racing as a child of Mario Kart and Rocket League related sports competition. crazy golf.

RELATED: 10 Great Sports Games That Aren’t Based on Real Sports

As already mentioned, Turbo Golf Racing has a lot in common in the overall game design and basic game mechanics with Rocket League. For example, both games have the same futuristic cyber aesthetic, which has become synonymous with the overall design of Rocket League. In addition, both games have similar control schemes, including acceleration, aerial maneuvers, “jumping” and much more, while vehicle control plays a central role in the successful gameplay of Rocket League. This is a common solution, since trying to bring realism to a game about car sports by colliding with opponents and flying in the air would be a daunting task for any game developer. Despite this imitation, fans agree that Turbo Golf Racing does its best to emulate the spirit of Rocket League without too much violating anyone’s intellectual property.

Perhaps that’s why Turbo Golf Racing decides to include a broader set of gameplay elements to go beyond the more traditional Rocket League approach. Typical of the go-kart style of games like Mario Kart, Turbo Golf Racing also includes a number of “power-ups” that players can collect to help themselves or hinder others. In the game’s announcement trailer, for example, rocket weapons are used to stun a player in the middle of a race, similar to how green, red and blue projectiles stop players. Mario Kart is compared not only with these bonuses, but also with its courses, since, like its namesake in golf, Turbo Golf Racing uses exclusively two-point “tracks” or sprints. Mario Kart has a number of courses with varying degrees of environmental hazards and sprints that have a style similar to its own Turbo Golf Racing, making it the perfect combination of two corresponding Nintendo and Psyonix games.

Despite the fact that fans make these comparisons, this does not prevent Turbo Golf Racing from bringing its own unique style and personality. Unlike Rocket League, which focuses on football, Turbo Golf Racing, unsurprisingly, will use golf. Although it would be more accurate to say that Turbo Golf Racing will use crazy golf instead, because in traditional golf games, not all players compete to score the fastest hole at the same time, and at the same time the players will not collide with each other. another one with bonuses and cars with rocket engines. Also, unlike the usual crazy golf, the courses have been designed to be best suited for car play, with nice additions such as rings that will push the balls towards the goal.

To this end, Turbo Golf Racing also makes a number of improvements that improve the quality of the gameplay, which, perhaps, Rocket League should pay attention to. For example, Turbo Golf Racing allows players to visually see where the ball will fly when hit, and the game demonstrates a better approach to controlling both the player and the ball in the air to make the game more accessible to play. In this way, the game can provide a gameplay that is easy to enjoy but difficult to master, and can put Turbo Golf Racing in the fight for a new possible esports alongside the likes of Rocket League. Turbo Golf Racing seems to be already expecting this model, as Halfcalf Studios is conducting open beta testing via Xbox, but it remains to be seen what impact the official launch of the game will have.

Turbo Golf Racing will be released on August 4 on PC, Xbox One and Xbox Series X/S.

Huge anime attack is coming from Netflix in 2021