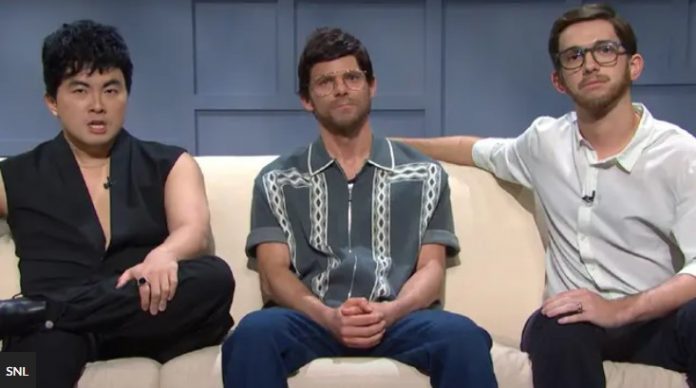 The late-night comedy show “Saturday Night Live” released a parody mocking The Try Guys after Ned Fulmer was fired. Viewers reacted angrily, calling out SNL for siding with Ned in an exposed affair he had with an employee.

The Try Guys, everyone’s favorite group of enterprising YouTubers, informs its viewers about the ongoing difficulties associated with the dismissal of creator Ned Fulmer due to an affair with an employee. Although specific details were scarce, the band spoke openly about the emotional and frustrating positions they found themselves in.

This includes several updates from the team as a whole and a deeply personal response from single members such as Becky Habersberger, Keith’s wife. Keith and Zach also talked about their problems in the latest issue of the TryPod podcast.

Despite the fact that Ned’s dismissal caused a variety of reactions, most of them were impressed by how quickly and professionally The Try Guys handled this issue. In the era of the “Me too” movement, seeing a company take quick action was amazing and refreshing.

Although it was confirmed that the case was consensual, Ned’s position as an executive producer testified to a clear imbalance of power that made the relationship inappropriate. This case also violated the company’s moral principles, making Ned’s dismissal the only way out of the situation.

SNL Mercilessly Mocks The Try Guys in a “Comedic” Parody

While SNL is known for making fun of many types of current events, a parody uploaded to the Saturday Night Live YouTube channel caught viewers by surprise. The parody begins with a “CNN broadcast” in which a “reporter” prepares to report news about the president outside the White House.

However, the video soon takes an alarming turn, moving on to a re-creation of a recent Try Guys video titled “what happened.” The actors portraying Eugene, Zach and Keith exaggerate the emotional and vulnerable reactions that were shown in the original video, as well as ridicule their careers and content.

The video gets particularly nasty as CNN anchor Laura Fields seems to be aggressively supporting Ned Fulmer, offering lines such as “I’m sorry, why is this disgusting” and “Bro, Jay-Z cheated on Beyonce, it’s going to be good.”

Viewers in the comments were not impressed by the parody: one of them said: “Hello to Ned’s college friends for writing this parody, which downplays his cheating on his wife with a subordinate, and other guys look ridiculous because they actually treat a clear company/hour correctly. violation.” while the other adds: “Even an old fart like me, who thinks that most internet dramas are something very stupid, admits that this situation was not just two colleagues fooling around at a concert. This was a business owner who had a long-standing affair with a subordinate, which means that their entire corporation is now open to potential legal consequences.”

Another viewer comments, “I like that SNL is essentially making fun of a group of men for taking sexual harassment seriously at work and actually firing someone for it. The beginning was funny, but everything went awry when it became obvious what a poisonous view they had on all this. SNL really missed the mark on this issue, and he should be ashamed to post it on YouTube.”

Since most of the responses to the video are filled with outrage, it becomes clear that many SNL viewers did not find the unflattering images funny or situationally sensitive.