US President and Republican presidential candidate Donald Trump made statements about the election on his social media account.

Trump used the following statements in his statement:

* Last night, in most major states, I was often firmly leading, in almost all situations that Democrats ruled and controlled.

* Then as the surprise ballots were counted, they magically disappeared one by one. Very interesting, and the ‘pollsters’ got this completely and historically wrong!

* How is it that every time they count postal ballots, they are so destructive in terms of percentage? 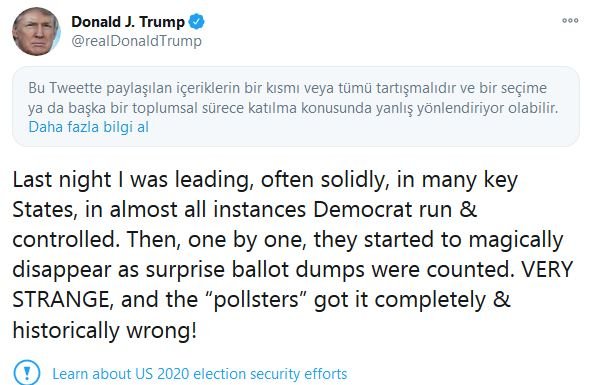 * In Pennsylvania, Wisconsin and Michigan, they find Biden votes everywhere. Too bad for our country!

* They are working hard to eliminate the 500,000 vote advantage in Pennsylvania – ASAP. Likewise, Michigan et al. Too bad for our country!

Twitter added a warning label to the statement made through Trump’s personal account saying, “Some or all of the content shared in this tweet is controversial and may be misleading to participate in an election or other social process.”

“We have a big advantage, but they (Democrats) are trying to steal the election from us,” Trump previously made. We will not allow this. “Votes should not be used after ballot boxes are closed” post, “warning” tag was added by Twitter.

The Outer Worlds presents a gameplay of its expansion

The Crown: Netflix is not crossed with the royal family!

Booba: a very funny joke about a cute cat!

Green Hell: survival game on Amazon is coming to Switch