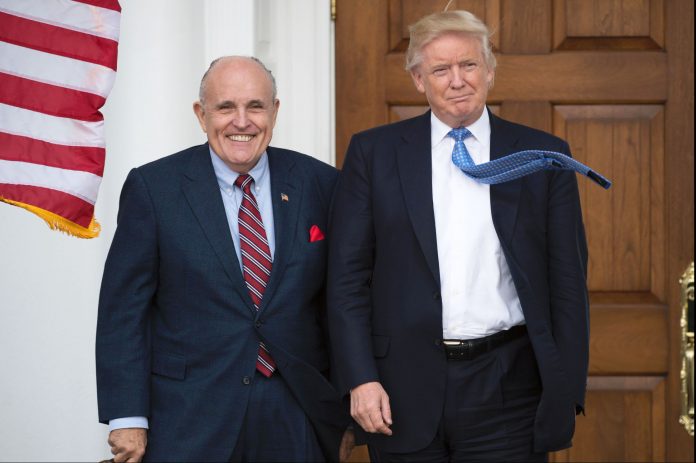 Rudy Giuliani, Donald Trump’s attorney, has been charged with defaming and accusing Dominion of being involved in alleged electoral fraud.

Dominion sued Giuliani after sending the lawyer two letters warning him that legal action was “imminent,” and the second letter on January 10 warned: “There is nothing I can say or do at this time to repair the hundreds of millions of dollars in damage that you and your allies have caused Dominion. ”

The company’s voting machines are at the heart of a far-right electoral conspiracy theory that alleges they were used to fraudulently influence elections against former President Donald Trump, dubbed by Dominion in the lawsuit as “the big lie.” , of which there is no evidence. support.

Dominion points to more than 50 statements that Donald Trumo’s attorney Rudy Giuliani made about the company that were allegedly defamatory, including comments on his podcast, on social media, in appearances on Fox Business, and during the Jan.6 rally that preceded the violent attack on the US Capitol building, which they said caused Dominion “unprecedented reputational and financial damage, and the lives of its employees have been put at risk.”

Giuliani “got rich by falsely claiming that Dominion fixed the elections,” the lawsuit alleges, and the company contends that Giuliani allegedly did so knowing the claims were false, because he made no allegations about the voting machines in the actual post-election trials of the Trump campaign.

Giuliani’s lawsuit comes after Dominion has already sued Trump’s former attorney, Sidney Powell, for defamation, and the company sent letters to more than 150 individuals and businesses warning of potential litigation.

How much is Dominion asking Trump’s lawyer?

“As a lawyer, Rudy Giuliani is well aware that he can be penalized for making false statements in court. That is why he never mentioned Dominion in court and admitted in court that his case was not a case of fraud,” said the lawyer Dominion’s Thomas Clare in a statement.

Instead, he sold his lies about Dominion in the court of public opinion, in concert with the reckless media that knowingly gave him a global platform to spit baseless falsehoods and undermine confidence in our democracy. “.

Dominion has suggested that it will file additional lawsuits against others who have perpetuated false accusations against the company, including media organizations, and has not ruled out suing Trump himself.

In its lawsuit against Giuliani, the company singles out top figures, including MyPillow CEO Mike Lindell, conservative attorney L. Lin Wood, Fox News, Newsmax, and One America News as others who were “determined to promote a false narrative. preconceived about the 2020 elections. ”

The Dominion defamation lawsuits are one of the consequences that Giuliani and other Trump allies are beginning to face for their post-election legal efforts and their unsubstantiated voter fraud claims.

Dozens of attorneys have filed an ethics complaint against Giuliani with the New York State Bar for his post-election conduct, seeking to have him investigated and potentially disqualified, and Powell faces possible penalties for a failed post-election lawsuit in Michigan that made allegations. on Dominion, among other ramifications.

How Did a $ 10 Million Crypto Investor Turn Over?