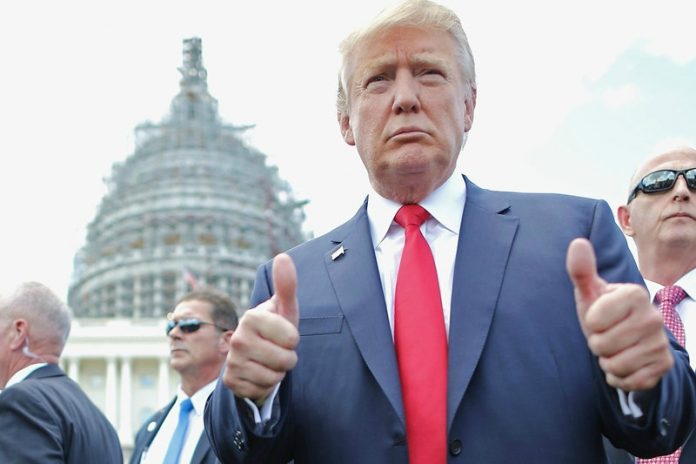 After the capture of the Capitol, Trump’s tweet is recalled calling for 10 years in prison for protesters who attack the Capitol

After the taking of the Capitol, by protesters and fans of Donald Trump, a tweet published by the same president of the United States has reappeared. Said message posted on his social network demanded that the Capitol protesters serve 10-year prison sentences.

On January 6, a crowd of thousands of pro-Trump protesters stormed the Capitol during the confirmation of the electoral college votes on Wednesday, halting the process to confirm the victory of President-elect Joe Biden for several hours.

The building was locked up when numerous lawmakers and staff members were forced to barricade themselves in the offices to hide from the rioters, some of whom carried pistols and other weapons.

The rioters stormed the Capitol after attending a rally organized by Donald Trump, where he incited the insurrection with a speech, saying, “We are going to walk to the Capitol,” adding: “You have to show strength, and you have to. be strong”.

Flashback: July 27. Trump called for protesters who damaged federal buildings to get a minimum of 10 years in prison. pic.twitter.com/3F58IR1HHf

“I ask everyone in the United States Capitol to remain in peace. No violence! Remember, WE are the Party of Law and Order: respect the Law and our great men and women in Azul. Thank you! “He tweeted Wednesday night.

Trump’s language stands in stark contrast to the demands he made during the Black Lives Matter protests in July 2020, when he called for protesters to be sentenced to 10 years in prison if they vandalized federal buildings.

On that occasion protests against police brutality raged for months during the summer, following the death of George Floyd in Minneapolis.

On July 27, 2020, Trump tweeted: “Anarchists, agitators or protesters who vandalize or damage our federal court in Portland, or any federal building in any of our cities or states, will be prosecuted under our newly enacted statues and monuments. Act.”

Trump tweeted the warning after a small group of protesters tried to set fire to federal court in Portland, Oregon. He also supported the use of the National Guard in the city, but in Washington on Wednesday it was Mike Pence, his vice president, who authorized the deployment of the Guard.

Yellow Day, get ready for the happiest day of the year