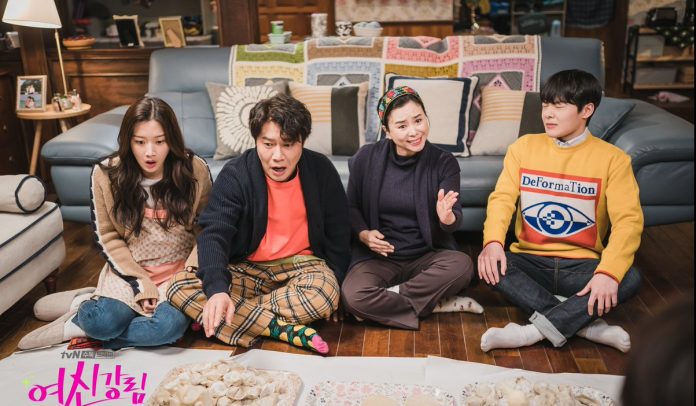 With only a few days to go, the K-Drama True Beauty continues to surprise with its original story and excellent performances. The most talked about recently correspond to that of actress Jang Hye Jin in her role as Hong Hyun Suk, mother of Lim Ju Gyeong (Moon Ga Young).

In a new video released by the producers of True Beauty, the entire cast tasked with playing the Lim family is seen practicing dialogue on set before they begin filming one of the saddest scenes in Episode 13.

When Moon Ga Young, in her role as Lim Ju Gyeong, begins to recite her lines in which she asks why she was not allowed to do the things she wanted to do and be with the people she wanted to be, actress Jang Hye Jin sadly comments: “But this is very sad.”

Hearing the actress, Park Ho San in charge of the role of Lim Dae Soo, father of the protagonist, jokingly comments, “Just say your lines.” To which Jang Hye Jin replies that she found what was happening to Lim Ju Gyeong’s character so unfair that she even had trouble learning lines from her and cried during rehearsals.

“I was wondering why it was hard for me to memorize my lines for this scene and I thought it was because I felt so bad about what Lim Ju Gyeong said. I even cried during practice.”

Two scenes of the Lim family in episode 13 of True Beauty are the most commented on by the public, when Hong Hyun Suk (Jang Hye Jin) mother of Lim Ju Gyeong (Moon Ga Young) full of anger scolds her without knowing what she was doing. it actually happened, and then when he found out how much he had suffered and cries in pain.

In the video, pointing to Moon Ga Young, Jang Hye Jin says, “She’s so good,” and Park Ho San also comments, “She does it very easily,” while jokingly commenting on young actor Kim Min Ki, who plays Lim Joo Yeong the family’s youngest son, who must learn from his sister.

Meanwhile, Jang Hye Jin also praised Kim Min Ki affectionately stating that he had improved a lot, while Park Ho San joked again by commenting, “I think he has gotten taller too,” to which Kim Min Ki excitedly exclaimed. : “Seriously?”.

As you will recall, the True Beauty plot had a shocking ending in Episode 12, with Lim Jun Gyeong’s biggest secret being uncovered and new events raising high expectations about whether the story will have a happy ending.

Camila Cabello’s Music is voted “Song of the Year” in the...