Home Sport Trippier: “Messi walks and walks, but when you realize, he already scored” 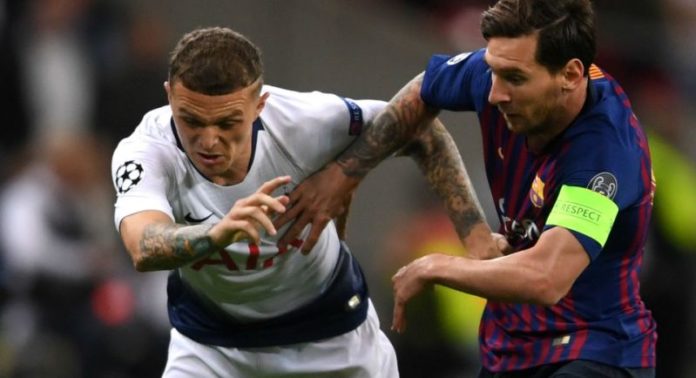 Kieran Trippier talked about what it’s like to play against Lionel Messi a few hours after Barcelona’s arrival at the Wanda Metropolitano to face Atlético de Madrid.

Trippier had to face the five-time winner of the Golden Ball when last season Barça played twice against Tottenham, for the group stage of the Champions League.

Barça beat the Spurs 4-2 in England, with Messi making two goals after wreaking havoc on the London defense during the 90 minutes.

Trippier left North London to sign for Atlético de Madrid during the summer transfer window, and is now preparing to face the Rosario genius for La Liga, this Sunday, from 9:00 p.m.

Recalling Messi’s stellar display against Tottenham last year, the England international said, in statements for ‘The Athletic’, that the ’10 Barcelona ‘even played above his chances against the Spurs. “He scored two and must have hit the wood about four times. It was amazing, “he said.

When asked what it is like to play against Messi being a defense, Trippier added: “It’s strange, at some point. He spends much of the game simply walking and walking. You play against Sadio Mane (of Liverpool), for example, and if you take away his eye for a second, he will go behind you. But with Messi, you look four times and he’s still there. It’s strange. Many times he just walks and walks, and then, before you know it, he makes a goal. ” .

“Before Barcelona has made three passes, he already knows where the ball is going. It’s amazing how smart he is. Even when he walks like this, you always have to be aware. It’s amazing, the best of all,” he praised the side mattress

Trippier accumulates 14 matches in all competitions with Atlético, between Liga and Champions League. The 29-year-old enjoys his time at the Wanda Metropolitano, having left his “comfort zone” to undertake a new challenge in an “incredible city”. “I love it, excellent football, excellent lifestyle,” he summed up. “Madrid is an incredible city, there is much to do. I have left my comfort zone,” he said.