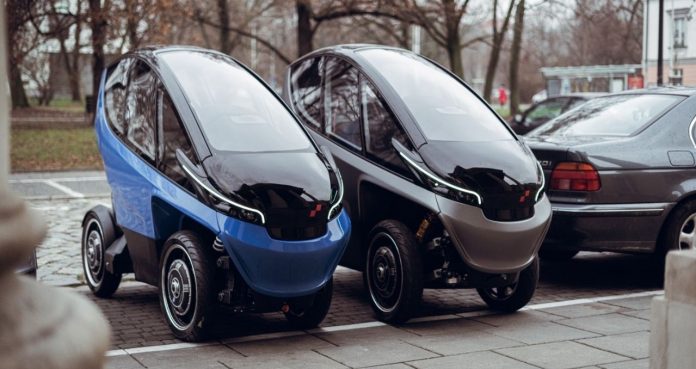 Especially with Tesla, who is the pupil of Elon Musk, many people’s view of “electric cars” has changed. Tesla, which leads the product development processes of companies, also sets an example for many different electric models such as Triggo. The electric vehicle Triggo, which focuses on efficiency, has compact design and functional features.

Positioned as an electric four-wheeled vehicle, Triggo stands out with its ease of use. The company seems to emphasize an internal dynamic that allows it to facilitate maneuvering with its wheels while on the move.

Subsequently, this two-seater electric vehicle, which offers a more environmentally friendly journey because it is electric, is covered like a car but does not have automobile features.

Poland-based Triggo takes the comfort of the driver through the movement of its wheels in bends and different maneuvering situations. When reaching high speed, the vehicle can swing its wheels sideways in order to maintain balance.

Based on a shared system and developed for package deliveries, Triggo can reach a maximum speed of 90 km / h. The electric vehicle, which has different modes, reaches a different dimension in cruise mode.

This vehicle, which looks cute in design, can carry loads of maximum 750 kg. A digital display is known inside the vehicle and this allows the user to select driving functions and modes.

In addition to the digital instrument panel, there is also physical control. Triggo offers usage up to 140 km thanks to its existing battery configuration. Triggo, which is said to be ready for computer-controlled autonomous driving thanks to the developed steering system, really draws attention.

For now, it is worth mentioning that the public tests of Triggo have just started and are in the prototype stage. The company states that the vehicle will be ready for use for shared rental services and deliveries from 2022.

It is aimed to be put on the market in connection with the autonomous taxi service after 2023. Robo Taxi operation will start its operations under the monopoly of China, India and Russia in the first place.

From Young Climate Activists to Leaders: ‘You Stole My Dreams ’