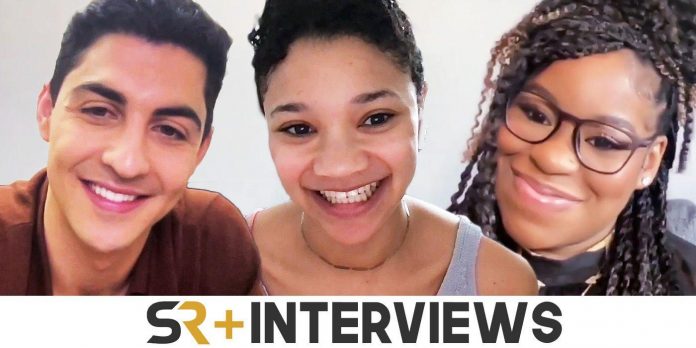 Whiles zombies, werewolves, and aliens compete for the spotlight in Zombies 3, the humans of Seabrook don’t intend to be left behind either. The third film in the popular Disney Channel film series, which has made the big move to Disney+, focuses on an intergalactic cheer-off that pits the very best of humankind against friendly alien arrivals. But the new neighbors are hiding their own reasons for visiting, and the stakes are much higher than learning a simple routine.

While student body president Bucky (Trevor Tordjman) tries to rein in the chaos and prove his spirit fingers remain the most nimble, fellow cheerleader Bree (Carla Jeffery) remains loved up with her zombie boyfriend Bonzo. And speaking of zombies, Eliza (Kylee Russell) is off at her internship, but still doing her best to help her friends back home with important things like the competition and getting into college. Zombies 3 also stars Meg Donnelly as Addison, Milo Manheim as Zed, Chandler Kinney as Willa, Ariel Martin as Wynter, Pearce Joza as Wyatt, Terry Hu as A-spen, Matt Cornett as A-lan, Kyra Tantao as A-li, James Godfrey as Bonzo and Kingston Foster as Zoey.

Screen Rant spoke to Tordjman, Jeffery and Russell about their individual arcs and romances in Zombies 3, as well as what inspires the spirit of competition in their own lives.

Screen Rant: Bucky’s the president, and yet everyone is looking to Addison for leadership in this time of crisis. How does that make you feel?

Trevor Tordjman: I’m quite disappointed as Bucky. I think people should be coming to me as Bucky and no one is, so I think he’s kind of struggling for the attention a little bit in this movie. He’s reaching, and it might make him do some bad things. We’ll see.

Carla, I love Bree and Bonzo. First off, do you speak Zombie? And if not, how do you communicate?

Carla Jeffery: He’s definitely a teacher. he helps me with the language. I asked him, “how’s the [imitates Zombie speech]?” There’s some things I need some help with, but I’m getting better.

This is our third time being together, so these years I’ve definitely learned a lot. The language is difficult, but I’ll do anything for my Bonzo.

Kylee, Eliza is breaking glass ceilings, and we love to see it. Some might argue that she may be the most exceptional zombie who deserves to go to college. But that aside, what can you tell us about her journey in this film, and about being behind the screen?

Kylee Russell: She just wants what’s best for zombiekind and for her best friend. I’m sure she would love to go to college, but at the same time, where she’s at now is also a dream of hers. And to support her best friend in achieving his dream also means the world to her.

She knows that if she helps Zed, she’s helping all zombies everywhere. To be able to help her friends with the alien invasion in her best way possible, I think she’s just happy to still be able to be a part [of it] and be there for everyone – but also being far away, I was sad.

Seabrook gets swept up in the spirit of competition this film. What is one thing each of you are extremely competitive about in life?

I grew up with my family playing board games and strategy games and stuff, so I learned to have a bit of a competitive edge.

Carla Jeffery: Honestly, I just love playing a whole bunch of different games. That’s something I’ve always loved, so I’m very competitive when it comes to that. Whether it’s card games or – all the time on set, I’m always trying to play Heads Up. I love playing the game, so I’m always competitive with that. Like, “We gotta get this right. I gotta win!”

Honestly, for me, it’s just games.

Kylee Russell: I’m competitive with games, but also, I feel like I’m really competitive with myself. I’m always trying to top whatever I did, even if it’s making coffee. Can I make coffee 30 seconds quicker than I did yesterday morning? You put it in a microwave, and you’re like, “Alright, how many things can I do before the timer runs out?”

It’s Zed and Addison’s final year at Seabrook and things are better than ever. The town has finally accepted monsters as a part of Seabrook and has become a safe haven for monsters and humans alike. Zed is on the cusp of receiving a football scholarship and becoming the first Zombie to ever attend college (and he’s excited to join Addison who has already been admitted). Addison is excited to mark the opening of the town’s brand new “cheer pavilion” by inviting cheer teams from all over the world to compete in an “international cheer-off.”

However, the town is shocked by the arrival of a new group of intergalactic outsiders – Aliens, who show up to compete in the cheer-off. Though they begrudgingly allow the Aliens to stay for the competition – the monsters and humans of Seabrook grow suspicious when they discover that the Aliens may be looking for more than a friendly competition.

Summary of the 6th episode of “Stranger Things 4”

How to find hidden message in GTA 3 Trilogy Edition?