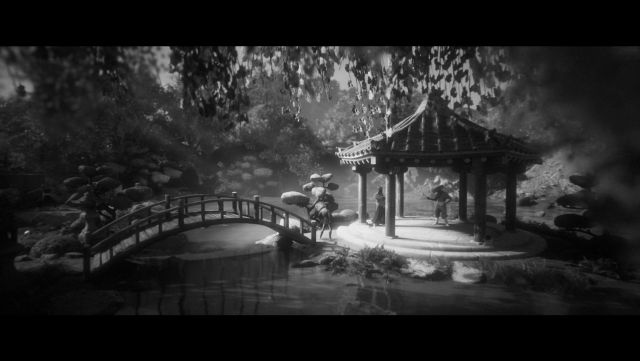 Trek To Yomi: We tested the first two chapters of the new Flying Wild Hog video game, a true love letter to Japanese cinema of yesteryear. Leonard Menchiari, head of Trek to Yomi, says that the idea of ​​the video game came to his head “when experimenting with the black and white images of the Unreal Engine and thinking about Kurosawa’s films.” Another of the influences has been the silent cinema “of the 20s and 30s, where each scene was designed more like a magical moving theater than like a screen”. After trying the first two episodes, it has become clear to us that the new production of Flying Wild Hog has something special, but does it go beyond the merely aesthetic?

Hiroki is still a child, but he already learns the basics of the bushido path from Sanjuro, his teacher. He lives in a small town like any other, where people make a living with the work of their hands. 19th century, still in the middle of feudal Japan. The tranquility of the village is suddenly shattered when bandits burst in with the full force of their weapons, as in Akira Kurosawa’s classic The Seven Samurai. Alarmed, the master prepares the katana and goes to confront the enemy.

A game with the flavor of classic Japanese cinema

The title picks up at that point, after a fencing lesson that serves as a tutorial to learn basic combat moves. Hiroki, accompanied by the teacher’s daughter, the young Aiko, goes outside. The first thing that catches your eye is the beautiful black and white aesthetic, with settings and characters that take us directly to the origins of classic Japanese cinema. The camera is not free, but it favors a composition of still or moving shots that prioritize visual narration. As we walk, the scenes change in real time: lightning on the horizon, fire devouring some houses, a tree collapsing with a crash.

The locations in Trek to Yomi have been carefully designed and are not randomly generated. The studio has placed collectibles, power-ups, and other items for the player to spend their time exploring. Not that the paths are intricate or that the possibilities in that sense are abundant, but the design is so attractive that everything that happens around is worth observing.

In those first minutes of the game we dedicate ourselves to listening to the dialogues of the common people, the people of the town, who talk about their day to day. It should be noted that the title has voices in Japanese, so the immersion in that sense is total. Hiroki can interact with some of the characters to trigger dialogue or provide a little help, such as moving a car out of the way. Also, certain elements of the stage are interactive and can be used to kill bandits.

The narrative is also supported by cinematics that delve into that cinematographic component, with certain transitions and effects that give it an old look. The plot, without being particularly complex, picks up the essence of the classics and offers us a story of revenge and overcoming, in which Hiroki protects the town with his life if necessary.

Why Buffy’s Gentlemen Were Better Villains than Any Vampire