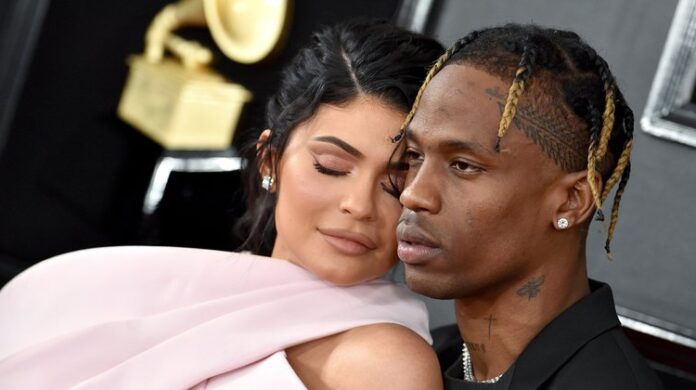 Kylie Jenner and Travis Scott are now an iconic couple! We invite you to discover the most romantic moments between them!

Travis Scott and Kylie Jenner may have paused in their relationship, this couple panics. The fans long to see them together again. In any case, they have left unforgettable moments behind them . If Stormi finds herself split between her two parents, the latter always form an ideal couple , for fans. Indeed, many would like Kylie Jenner and Travis Scott to get back together.

However, the couple insisted on taking a break from their relationship . That said, they do everything to remain wonderful parents for their little girl! Besides, Travis Scott’s darling remains convinced that the latter is the best father Stormi can have. Proof that she does not cross a cross on him!

Especially since despite their jagged couple life, the couple had more than moving moments. We therefore invite you to come back to the best stages of their married life .

KYLIE JENNER AND TRAVIS SCOTT: THE BEGINNINGS OF THEIR MARRIED LIFE
At the very beginning of their relationship, the couple was first seen hand in hand at Coachella , in 2018. A memory that remains etched in the minds of fans of Kylie and Travis Scott.

Although it is not their first date, it marks a certain outcome in their relationship. Another highlight: Kylie Jenner and Travis Scott, attending an NBA game in 2017.

We still remember Kylie’s accomplice look, alongside her boyfriend of the time. And it’s not their only cult moment ! In 2018, Kim Kardashian’s sister joined the rapper during his tour. At the time, as Republic World recalls , Kylie Jenner described her relationship as “organic” .

Also, they could freely walk around town, without having to take out the “Kylie and Travis” label . An appellation that now sticks to their skin! Things could not be simpler, and the couple lived a rather discreet idyll . Things have changed, after they formalized their relationship!

GOT7 fans protest against JYP