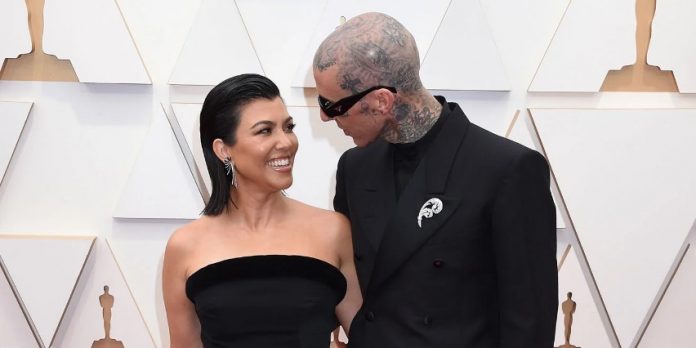 According to TMZ, which first reported the news, the couple attended a wedding chapel in Las Vegas early Monday morning (April 4) and were married to an Elvis impersonator when she was in town for the Grammy Awards, where Barker had performed just hours earlier with Lenny Kravitz and SHE

However, sources confirmed that although the couple did go to chapel, they are not legally married. Rather, the ceremony was just for fun—and a photo—after a few drinks (they had apparently joked about escaping to Vegas before). The couple plans to officially get married this year, and as can be seen from the Hulu preview, The Kardashians are focused on having a baby.

“I didn’t know who it was until they stopped. I advertise as a 24-hour, but they wanted to make sure I was still there,” One Love Wedding Chapel owner Marty Frierson told People of Barker and Kardashian. “They paid and asked for Elvis Presley, it was mandatory. I called back 5 minutes later and said, ‘I have Elvis,’ and here they are.” Frierson also told the magazine that the entire event lasted about 30 minutes. This happened a year after they officially announced their relationship on Instagram.

Although in the past the couple did not hesitate to take a PDA with them, TMZ reported that they were not allowed to take photos at the wedding venue, preferring to accompany the blessed event with their own photographer and security. It is reported that the couple also had a marriage certificate, which they handed over to the owner of the chapel, who also acted as a witness.

According to TMZ, there will be “several” other wedding celebrations in the future.

The Blink-182 drummer and Kardashian posted a photo of their hands on Valentine’s Day in 2021, confirming that they were dating a few weeks before they officially discussed their relationship for the first time on the Drew Barrymore show a few weeks later. A few days later, Barker, a twice-divorced father of two, shared a handwritten love note he wrote for the reality TV star on his Insta Stories.

Over the next few months, the couple were spotted several times, often with their friends Machine Gun Kelly and Megan Fox. In April, Kardashian, who shares three children with ex Scott Disick, revealed that Barker tattooed her name on his body, and in May, more ink appeared on the drummer, on which “I love you” was written in her handwriting.

Over the next few months, they chatted about each other, shared some personal moments with their mixed family, collected PDAs, and in October announced their engagement in Instagram posts with the caption “forever.”

Song Joong Ki Shows That He Will Be A Good Dad...