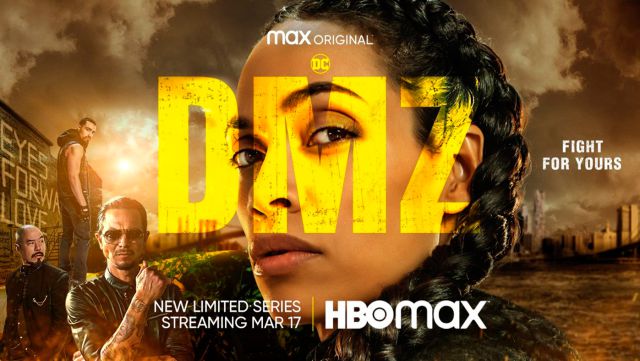 DMZ: HBO Max presents the trailer for its new series based on a comic for adults in which the United States is plunged into a civil war: release date. DMZ, the new and long-awaited dystopian series based on the DC Comics graphic novel, presents a first and spectacular trailer that you can see on these lines along with its official poster, synopsis and release date on HBO Max. This has been published by the platform through its official channels, presenting this new adaptation of the stories for adults from the famous publisher and which has the actress Rosario Dawson as the main protagonist.

Thus, DMZ will arrive as a mini-series or limited series on HBO Max on March 17, 2022 through four episodes. The series, starring Rosario Dawson (Ahsoka Tano in the current Disney + Star Wars series) plays a mother in search of her lost son in a demilitarized Manhattan in the middle of the United States civil war, in the future next. DMZ is directed and produced by Ava DuVernay alongside Robert Patino (executive producer of Westworld); This is its official synopsis:

“In the near future, the United States is engulfed in a bitter civil war. Manhattan remains as the demilitarized zone, destroyed and isolated from the rest of the world. DMZ chronicles the harrowing journey of the intrepid and fierce doctor Alma Ortega, who embarks on a difficult journey to find her son, lost during the evacuation of New York City at the beginning of the conflict. Pouring gasoline on the flames of that conflict is Parco Delgado, the popular and deadly leader of one of the most powerful gangs in the demilitarized zone. He wants to rule the new world and will stop at nothing to get it.”

“In this expansive, adrenaline-pumping drama that examines a stark political and cultural divide in American society, Alma must confront the gangs, militias, demagogues and warlords who control this lawless no man’s land. By doing so, she will become the hope of all who have lost her, ”we can read in the official description of her. DMZ premieres on HBO Max on March 17.