Home Entertainment Tower of Fantasy: Location of the Ruin A-03 Chests 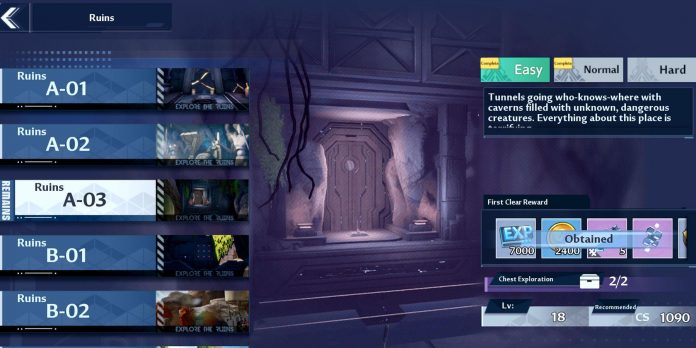 The ruins of the Fantasy Tower serve as small single dungeons in which travelers can reap valuable rewards. The first time players visit the ruins, there will be at least two chests around. Some of them are easy to find, while others are hidden, sometimes in plain sight. After getting the Chests, fight the last boss to finish the Ruins and get the rewards.

Each ruin has three difficulty levels: easy, normal and difficult. Each difficulty contains a different number of chests hidden inside. Of course, the harder it gets, the better rewards players get, plus the EXP wanderers gained from these Tower of Fantasy ruins are needed to level up and get better items and gear.

At the beginning of the ruins, Tower of Fantasy players can immediately see the first chest located in the upper right corner. Of course, wanderers cannot climb this wall unless they use a newly obtained relic, the Omnium Handcanon, which shoots at a pole that can be climbed. By climbing the wall, players can open the first Chest.

The second chest is a bit more complicated in Ruin A-03. After defeating a wave of enemies and moving to the next chamber, players may notice a small room to their right, protected by a laser barrier.

The laser barrier actually doesn’t harm Tower of Fantasy characters that much and doesn’t prevent them from passing through it. So the best solution is to just take the damage and march to the second Chest.

To play it right, the game wants players to use the new Omnium Handcanon and summon a pillar to block the laser gates. The next step is to enter the room and easily retrieve the chest without getting damaged.

The usual difficulty of Ruin A-03 in Tower of Fantasy has the first two chests located in the same places in simple mode, with the addition of two new chests hidden from prying eyes.

The first chest in the normal A-03 mode can be found immediately in the next room after climbing the wall. Players must defeat a bunch of enemies and then head west. At the bottom you can find a new chest.

In the same room to the east, a second new chest is located on top of an impassable wall. To reach it, players must use the Omnium Handcanon again and summon a pillar on the wall or on the floor in front of the wall.

In any case, it will be easier to get the Chest, because the wanderers of the Fantasy Tower can now climb the Pillar and get closer to the Chest.