Home Entertainment Tower of Fantasy: Location of the Ruin A-02 Chests 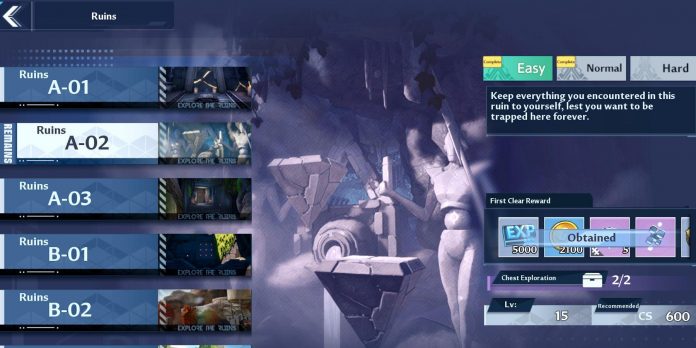 Ruins in Tower of Fantasy is a fun little mechanic implemented to enhance the role—playing element of the game. Upon completion for the first time, players receive some important rewards, such as relic materials. Relics are one of the most useful pieces of equipment that players can purchase in Tower of Fantasy, so raising their level after receiving all the necessary materials is important to increase their value.

Each ruin in Tower of Fantasy has three different difficulties, and each has its own chests to open. A-02 Ruin has two chests in simple mode and four chests in normal mode. The same two chests can be found at both difficulty levels and probably they will be in the difficult mode.

RELATED TO: Tower of Fantasy: where to find Laver

A-02 Simple Ruin mode in Tower of Fantasy has two chests. The first chest is easy to find. He is in the third room after defeating a bunch of enemies. Climb the stairs, and a Chest should appear in front of the character. In fact, all two Caskets of A-02 are in plain sight.

The second chest is also not hidden in A-02 Ruin. Immediately after defeating some enemies of the Fantasy Tower, move forward to the next room. To the east of this room, travelers may notice a chest to their right, right after they enter this room.

In total, A-02 Ruin in Tower of Fantasy Normal has four chests. The first two Chests are located in the same place where they were previously available in simple mode, and two additional Chests are hidden in the Ruins. The first Casket among the new ones is available in the first chamber into which the players descend. Look to the west, and the chest should be there, easily accessible.

This is the first chamber in which players must use the relic of the strange cube to move the cube standing on top of the key that opens the door to the next chamber.

The second chest, added to the normal A-02 mode in Tower of Fantasy, is a little more difficult to unlock. After defeating the last wave of enemies, before reaching the room with the final boss, players will have to jump on several moving platforms to get to the boss.

Before you tackle the moving puzzle, just turn left and follow this little path to the west. The hidden chest will stand there, waiting for the players to reap its rewards.

Ruins Chests are one—time rewards that can be obtained when players fulfill the necessary requirements to visit these Ruins. However, players who missed these chests can visit the same ruins again to find the missing chests, and exit immediately afterwards.

To visit the Ruins again, players can click the “Adventure” button and then select the recommended page. Ruins can be visited there, and travelers can choose which ruins they want to visit.