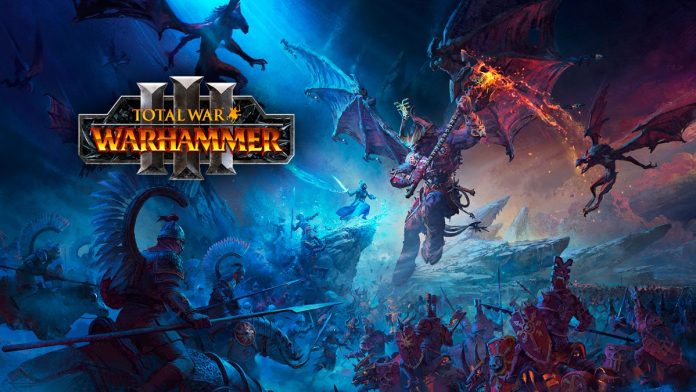 Total War Warhammer 3: We tested for the first time the third and final installment of the trilogy that will shape one of Creative Assembly’s most ambitious games. Since Total War Warhammer was announced at the time, it was clear that the intention was to make a trilogy. The Games Workshop license was a dream for Creative Assembly, whose inner core is made up of board game fans (not surprisingly, when entering the office the entrance is always decorated with display cabinets full of hand-painted figures, even quite before this agreement was signed and its catalog was based exclusively on historical periods). So with these precedents, it is not surprising that when they achieved it they wanted to do it in a big way, with a monolithic work that would shine especially within the company’s exalted catalog. Countless armies and factions, dozens of renowned champions, dozens and dozens of units, an immense land threatened by the growing power of Chaos … a single game was not going to do it justice.

At the moment, it can be said that the challenge is being a success. The two present installments have managed to merge the elements of Total War, its spectacular battles and long campaigns in the Warhammer universe, adding an endless number of constant novelties, characters, objects, missions and objectives that are forming a game that is already dense in its content , with attractive content for the solo player and for those who enjoy multiplayer. A long cast of mods deepen and personalize the experience even more, leaving a game that continues to grow and that interconnects in the so-called Mortal Empires, a sandbox that, in its final form, will be one of the most impressive fantasy strategy games. that have ever been made, and one of the most significant works linked to this universe.

But now it remains to finish the job. The third and final installment of this trilogy arrives at the end of the year in what will be the definitive chapter that will put all the pieces on the board. We have had the opportunity to remotely play one of the most important novelties of the third campaign, a new mass battle modality that will play a key role in our confrontation against the forces of Chaos. Some forces on the other hand that are the main protagonists of this installment.

Total War Warhammer 3 will arrive with the figure of six factions, four of which are the hosts of the gods of chaos: Khorne, God of Blood, Lord of Skulls; Tzeentch, the Great Sorcerer, Transformer of Things: Nurgle, Pestilential Lord of Plagues and Pochedumbre; and Slaanesh, Prince of Chaos. The armies and champions of each of the Ruinous Powers will fight to conquer the north and thus guarantee the passage from the Realm of Chaos to the Old World to plunge mortals into despair. To these four vital forces to compose the puzzle of what the “figures” of Total War: Warhammer will be, we must add two other factions: Kislev, the most powerful human kingdom in the north, led by Tsarina Katarin Bohka, the Ice Queen. ; and Cathay. The latter is particularly interesting, since the so-called “Empire of the Celestial Dragons” has never had a guide book or figures of its own, it will be the first time that the Warhammer version of millenary China has a tangible representation and we can see them in action-surely followed by a new collection of figures with which to torture the pockets of long-suffering fans.