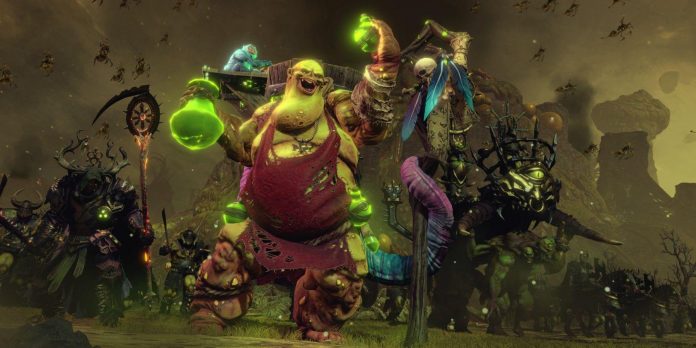 Total War: Warhammer 3, a popular strategy game from Creative Assembly, is the third and final game in the multi-year Warhammer trilogy. Introducing new armies and features, the latest game also combines all three initial campaigns into an extensive Immortal Empires sandbox, simultaneously recycling some old factions. One of the factions redesigned for Total War: Warhammer 3 is the Chaos Warriors, who received fresh content through the Champions of Chaos DLC.

Each of the Chaos Champions is dedicated to the God of Chaos, and Festus Lichlord is the Champion of Nurgle. As a servant of the Plague Lord, Festus adds a dose of plague and poison to the list of powerful Chaos Warriors. On the campaign map, Festus sows disease and corruption ahead of him, weakening his enemies before his inescapable armies sweep them away.

Like his fellow disciple Nurgle Ku’gat Plague Father, Festus has access to a Plague Cauldron in which Nurgle’s poison can be boiled. These non-standard diseases will spread automatically, providing positive effects to friendly armies and settlements that infect them, and negative effects to enemies.

To customize and improve your Plagues, Festus Lichlord must collect a large amount of Infection resource. This unique Nurgle resource can be obtained by winning battles, attacking settlements and spreading the Plague.

When players achieve certain goals, they discover new symptoms for their plagues, which allows them to further customize the positive and negative effects. Once enough of these symptoms are unlocked, players will be able to use recipes for legendary plagues. These unique combinations are more than the sum of their parts, offering the most powerful bonuses and penalties that Nurgle can bestow.

Despite the fact that in Total War: Warhammer 3, the Immortal Empires campaign begins in the heart of the Empire, Festus will want to go north as soon as he finds a break. This is because Norsk and the Wastelands of Chaos are home to the largest number of Dark Fortresses on the map. These rare locations are the only places on the map where Chaos Warriors can build significant settlements, and also automatically make the Norse tribe whose homeland they occupy vassals.

Even though Festus isn’t as good to take advantage of this mechanic as another Chaos champion Azazel, he shouldn’t ignore the benefits of having protected lands, stable income, and Norsk allies in Total War: Warhammer 3. It’s a good idea for Festus to send a second army north to capture these Dark Fortresses as soon as he can.

Whether he fights Norsk or the Empire, killing and capturing mortals, you will receive the souls of Festus, which can be offered to the Chaos gods — a unique resource of Chaos Warriors. These souls are used both for powerful passive buffs using the Chaos Gifts mechanics, and for improving the Lords and Heroes of Festus. Undivided characters who have reached a sufficiently high rank will be able to devote themselves to Nurgle, gaining new powers and abilities at the cost of half their level. Players can also spend souls to turn a high-ranking lord into an immortal demon prince, greatly increasing their strength, but again at the expense of half their level.

Creating an Army as a Festus

The Immortal Empire update for Total War: Warhammer 3 included a massive redesign of the Chaos Warriors, adding Festus many new ways to recruit and upgrade his troops. First, a set of squads that can be executed anywhere on the map, but it is limited by what squads are available in that province at the moment. Each province will have a different set of units from which to recruit, depending on factors such as the climate of the region and the local corruption of Chaos. This pool has a small chance to replenish each turn, and regular and low-level troops are more likely to become available again.

Once Festus has filled his armies with squads of squads, he can start improving them. By learning the right technologies, players will be able to transform their units into higher-level versions when they reach a certain rank. For example, a Marauder Rider can be upgraded to a Marauder Master and then to a Chaos Knight. As Nurgle’s servant, Festus can either keep the units of his Squad as normal Chaos Undivided, or grant them the Nurgle Badge by moving them to a separate upgrade tree for the units marked by Nurgle. Each Lord can specialize in commanding the forces of Nurgle or Indivisible, depending on their authority.

Fest on the battlefield

As a Champion of Chaos dedicated to Nurgle, Festus Lichlord uses a mixed list of mortal and demonic units on the battlefield. Unlike the fast armies of the Champion Slaanesh Azazel, the armies of Festus double the invincibility of the first Chaos Warriors.

The Crown: Diana and Charles Appear in First Season 5 Photos