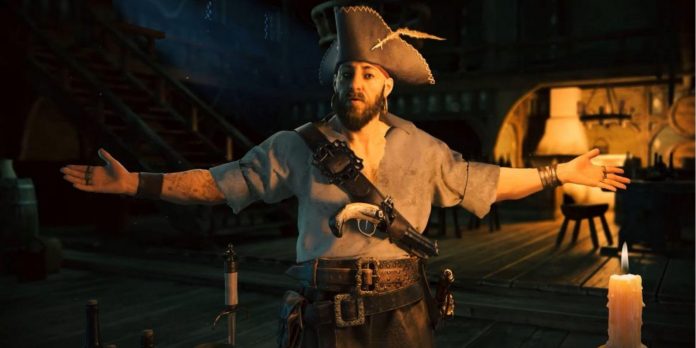 Tortuga: A Pirate’s Tale was announced at Gamescom’s Opening Night Live. This is the latest game from Gaming Minds, a German studio known for games such as Railway Empire, Port Royale 4 and Grand Ages: Medieval. The trailer showed many elements of the game, from ship battles to ship customization and exploration of the Caribbean Sea.

All these elements and visual effects from the trailer are reminiscent of an old pirate adventure called “Sid Meyer’s Pirates”! Like Tortuga: The Story of a Pirate, The Pirates of Sid Meyer! was a strategy game dedicated to the Caribbean. The name dates back to 1987, and its latest version was released in 2004. It looks like Tortuga: A Pirate’s Tale will be an upgraded version of this old but very successful game formula.

What is known about Tortuga at the moment

As for the genre, Tortuga is listed in the Epic Games store as a strategy, turn-based game and simulator. It will be released in the first quarter of 2023. Of course, it is made in a pirate theme and will include elements such as an attack on settlements, other ships and robberies. The ships seem to be highly customizable both in appearance and improvements, with up to 18 different types of ships.

The player who takes on the role of pirate captain is expected to juggle various things that have ever made it into the game, from crew morale to supplies. Players can also make decisions in the game, for example, who is a friend and who is an enemy. As the player gains more experience, he can learn various skills, of which more than 35 are available. Maritime powers include Spanish, Dutch, English and French colonies. Battles take place on hexagonal grids, like in a board game. Players can expect more than 25 hours of gameplay, depending on their style of play. There will be quests that the player can complete, and they can collect news from local taverns.

Sid Meyer’s Pirates! followed basically the same formula. Many call it the best pirate game of all time, and it still receives exceptionally positive reviews on Steam. Despite the common features, it does not have the same creators as Tortuga. Instead, it was developed by Firaxis Games Incorporated, a Maryland-based company. Like what Tortuga hinted in his trailer for “Sid Meyer’s Pirates”! They also included exploration, trade, naval battles, historical pirates and the capture of settlements. It also had Spanish, Dutch, English and French colonies with which players could either be friends or feud with them.

However, despite the age of Sid Meier’s Pirates!, it can be a challenging game in terms of how much a player can do. It won’t be fully known until Tortuga is released in 2023, but there is no mention of some of the other mechanics that are in Sid Meier’s Pirates! there were, such as mini-games with sword fights, ground wars comparable to Civilization, dancing at fancy balls and infiltrating enemy cities. For the old game, Sid Meier’s Pirates is a complex pirate game that cannot be compared.

But modernization is on top. Sid Meyer’s Pirates! This is a very old game with graphics that are very outdated compared to modern video games. Fans have been dreaming of a remake, and Tortuga may be the closest to it. Its graphics are great, the sea has different shades of blue for deep and shallow water, and the ships are beautiful enough for players to invest in aesthetic settings.

Tortuga: A Pirate’s Tale is due to be released in the first quarter of 2023 for PC, PS4, PS5, Xbox One and Xbox Series.