Home Entertainment Top speed and acceleration of the Ford F-150 Lightning: How fast can... 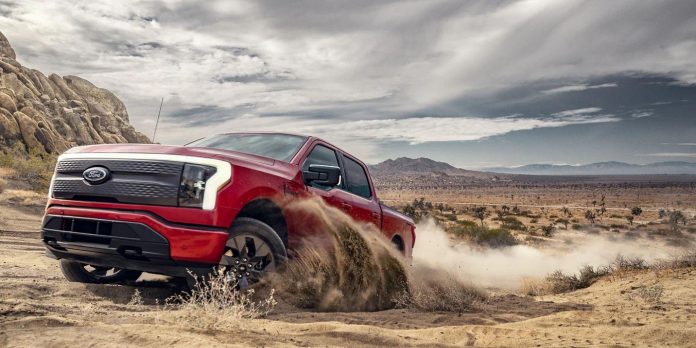 Ford F-150 Lightning is the first electric car in the series, but how fast can this electric truck move? Although the F-150 Lightning has the same body type as the gasoline-powered version, this Lightning variant is fully electric. The F-150 Lightning joins a growing segment of electric trucks such as the R1T Rivian and GMC Hummer EV. As the electrification of cars continues, it is logical that Ford decided to offer an electric version of its popular F-150 series.

Although Ford announced the F-150 Lightning in May 2021, the Detroit-based automaker intended to develop an all-electric variant from 2019. From 2019 to 2021, Ford engineers began production, which ensured that the electric car would retain the F-Strength and practicality of the 150s. Despite the negative reaction of some consumers to electric cars, they are beginning to be considered as a worthy alternative to gasoline-powered cars. Ford registered 44,500 orders for the F-150 Lightning within two days of the truck’s announcement. Driving an electric car dramatically reduces carbon emissions, which protects the environment. In addition, modern electric cars now offer much more than just a clear conscience. For example, Lucid Air offers impressive power and stylish design.

All F-150 Lightning trucks have two electric motors and an all-wheel drive configuration. Ford claims that the F-150 Lightning can accelerate from 0 to 60 mph in four seconds. Meanwhile, data available from the EV specs shows that the F-150 has a top speed of 111.8 mph. The electric truck comes with two battery options that affect the power output. These include a standard range battery (98 kWh) or an extended range battery (131 kWh). Interestingly, Ford announced the F-150 Lightning with a target power output of 563 hp and a torque of 775 lb-ft. However, a recent Ford Media Center statement shows a slight improvement over preliminary estimates. Now trucks with the standard package can develop power up to 452 hp instead of the announced 426 hp. Pickups with the Extended Range package can develop power up to 580 hp instead of the previously announced 563 hp.

When buying a Ford F-150 Lightning, consumers can choose one of four trim levels. The basic F-150 Lightning Pro package starts at $39,974, the XLT package will cost about $52,974, the Lariat trim retails at $67,474, and finally the premium Platinum trim retails at $90,874. These prices do not include additional costs such as shipping/delivery fees and taxes. While the first two trim levels come with a 12-inch touchscreen display, the two premium trim levels have a 15.5-inch display. Buyers of the Pro and XLT trim levels can choose to install a larger screen for an additional fee. All complete sets are equipped with the latest version of the Ford Sync 4 software.

The F-150’s standard infotainment features include integration with Apple CarPlay, Android Auto, built-in navigation, and Wi-Fi connectivity. There is also a “Phone as a Key” feature that allows drivers to control the F-15 Lightning without having to use a keychain. This function covers functions such as starting/stopping, locking/unlocking and opening/closing the trunk. Drivers can use the latest software using Ford’s cloud platform, which supports automatic downloads. Ford has improved its driver assistance game by offering an optional semi-autonomous driving mode called BlueCruise. This could be a worthy rival to the driver assistance packages offered by automakers such as Tesla. Although BlueCruise allows drivers to drive without using their hands, Ford F-150 Lightning drivers need to remain vigilant while this mode is enabled.

How Victoria Neuman is connected to [SPOILER] in “Boys”