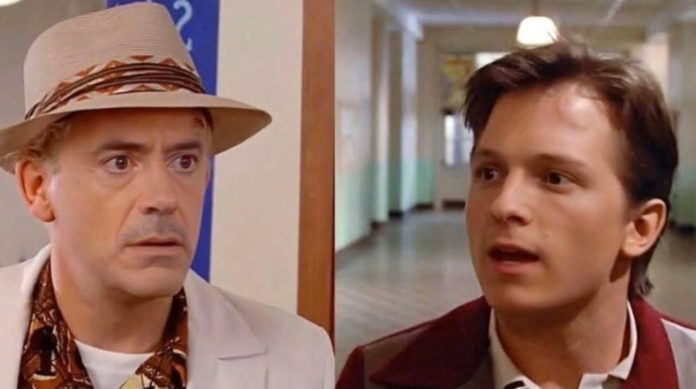 The Marvel superheroes decided to make a parody of the saga.

Tom Holland and Robert Downey Jr. became the favorite duo of some fans thanks to the “Spider-Man” and “Avengers” movies, even his character was the most affected by the death of “Iron Man”.

And if you’re one of those who loves watching them work together, the EZRyderX47 YouTube channel made it happen and both actors appeared in a parody of “Back to the future.” We tell you the details.

The trilogy of “Back to the future” is one of the most popular of cinema and geek culture, so those responsible for this channel made a dream come true that many did not know they wanted: a reboot starring Tom and Robert.

The scenes they recreated are from the first film, where “Marty” discovers that he returned to the past and altered the history of his parents, who had to fall in love, but with his appearance he made his mother fall in love with him, endangering his existence. You could say that his performances are good, right? Even the scenery is the same, but everything is fake.

No doubt Tom’s resemblance to “Marty” is incredible, but it’s all due to a technique that has gone viral, it’s a more advanced kind of photoshop. The actor has almost the same factions and the same body proportion, so the edition was perfect and it really seems that Tom made these scenes. Robert “plays” the “Doc.”

This montage is known as Deepfakes , which consists of putting someone else’s face on another person’s body. Although it is a fabulous parody, many fans have been surprised by how similar Tom and “Marty” are and has raised hopes for a ” Back to the future” reboot . What do you think?