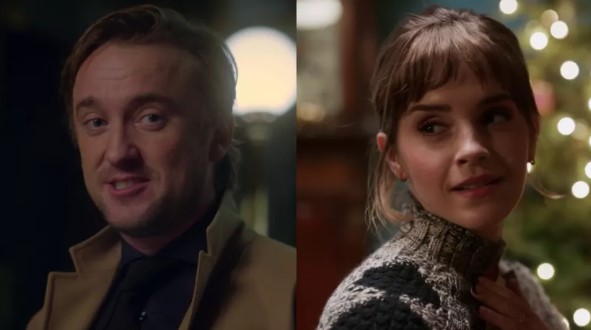 Tom Felton and Emma Watson Draco Malfoy and Hermione Granger may have had an antagonistic relationship in the Harry Potter series, but in real life they had a very friendly relationship with each other. Asking how friendly the question was when it was first revealed that during Harry Potter and the Chamber of Secrets, Watson was in love with Felton. In his new memoir of his time in the Harry Potter films, Tom Felton has written about his ‘unspoken’ love for Emma Watson.

Memorable moments from HBO Max’s Harry Potter 20th Anniversary: ​​Hogwarts Return are proof that the co-stars, who have worked together for ten years, develop a bond with each other that will never fade, no matter how long they see each other. According to the Daily Mail, Tom Felton wrote in his memoir Beyond the Wand: The Magic and Mayhem of Growing Up as a Wizard about how he felt about his former Harry Potter co-star Emma Watson. One passage reads:

I’ve always had a secret crush on Emma, ​​though maybe not in the way that people would like to hear. This does not mean that there was never a spark between us. It’s definitely there, just at different times.

There is always someone who left, right? At the time when Emma Watson was in love with Tom Felton, she was 12 years old, and he was 15 with a girl. She previously said that Felton was her first love and that they still laugh about the topic. In one of the adorable moments they shared during the reunion, Watson said she first fell in love with Felton when, during a tutoring session, they were tasked with drawing what they thought God looked like, and he drew a girl with a skateboarding cap. backwards. . This clearly made her faint! But when they first met, their relationship was as antagonistic as their personalities. Our favorite Slytherin actor was stunned that Watson didn’t know what a boom mic was during their audition and Felton was hanging out with his clique of other Slytherin actors by himself. It seems that life imitates fiction.

Even though these two Harry Potter stars never had a romantic relationship, they still keep giving us all these reasons to send them. A few years ago, Tom Felton posted a photo on Instagram of himself teaching the Beauty and the Beast star how to play the guitar, causing a social media sensation. He added in his book, touching on rumors that he is romantically interested in Emma Watson.

There were rumors that there was more to our relationship than we let on. I denied that I liked her that much, but the truth was different. My girlfriend at that time immediately realized that there was something unspoken between us. I remember using the familiar old phrase, “I love her like a sister.” But it was something more.

It seems that Tom Felton noticed a small spark between himself and Watson. But at that time there were always other relationships. Actor Belle was in a relationship with Jade’s stunt assistant Olivia Gordon, whom you saw playing his wife in the epilogue of Harry Potter and the Deathly Hallows Part 2 from 2008 to 2016. Emma Watson was in a relationship with American businessman Leo Robinton from 2019 to 2021. She is currently dating Brandon Green, the son of billionaire Sir Philip Green. So since Emma Watson has been taken away, we should probably hold off sending her with Felton.

Although Tom Felton seems to love Emma Watson very much, he doesn’t describe it as romantic love, despite how much she means to him.

I don’t think I was ever in love with Emma, ​​but I loved her and admired her as a person in a way I could never explain to anyone else… we were kindred spirits. I know for a fact that I will always have Emma’s back and she will always have my back.

The Bling Ring actress called Tom Felton her “soulmate” while writing the foreword for his new book. She talked about the connection between the two of them and all of his wonderful qualities. In fact, we can thank actress Hermione Granger for inspiring Felton to tell his story exactly the way it is and not skip a beat or embellish anything. This is great advice for memoir writers: don’t be afraid to tell the truth when you’re giving readers a glimpse into their experiences.

Even if Tom Felton and Emma Watson don’t have romantic feelings for each other right now, they still have a strong nascent love for each other and will always stay with them. You can watch the two in a special Harry Potter reunion on HBO Max subscription and the entire Harry Potter series on Peacock subscription. Be sure to check out Tom Felton’s memoir Beyond the Wand: The Magic and Mayhem of Growing Up a Wizard, out on October 18th.

Channing Tatum is shooting a new action movie with the X-Men...