Home Entertainment Tokyo Ghoul: Why is Arima so strong? 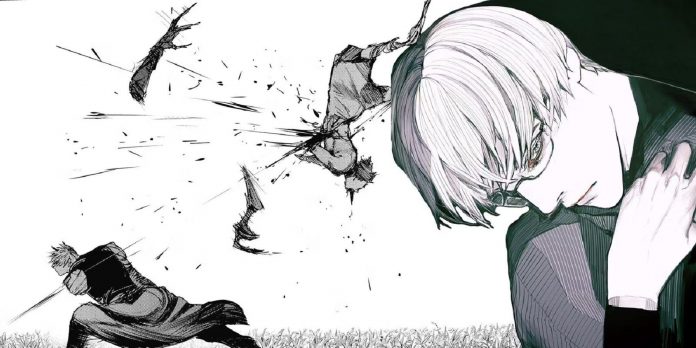 There are countless powerful characters in Tokyo Ghoul, both on the side of the humans or the Ghoul itself. That is pretty much the reason why there are so many intense and iconic fight scenes in the series. After all, when those strong people stumble across one another, a gruesome battle to the death is bound to happen.

That being said, one man does rule over both human and ghoul as someone who is universally accepted as the strongest. The last thing anybody wants is to have this man standing in front of them as their opponent. Because no matter how tough you are, he is leagues above you. His name is Kishou Arima, and here is the reason why he is so insanely powerful.

Before we discuss his power, let’s briefly talk about who Arima is as a person. Kishou Arima is a tall man with a relatively muscular build, but not to the point of being buff. He has short, ashen white hair, with square glasses that further emphasize his cold, emotionless gaze. He is a man with a few words who chooses to let his action speak for itself.

Arima is a Special Class Ghoul Investigator in CCG (Commission of Counter Ghoul), an organization that specializes in hunting and studying Ghoul. Not only is he one of the highest ranked members of CCG, he is also the leader of the S3 Squad. A group that specializes in tackling cases with the highest level of threat, and it is composed of only the most elite Investigators and fighters that the CCG has to offer. He also leads another special group called the Squad 0 in Tokyo Ghoul:re who act directly under his command.

Arima has been an investigator for CCG since he was a teenager. As a matter of fact, he is one of the most successful ghoul investigators in history. Countless S-rated ghouls have fallen victim to his blade. Within the CCG itself, Arima is both revered and feared by his colleagues. He is known both to humans and ghouls alike as the “CCG’s Reaper” or the “White Reaper”.

How Strong is Arima?

The last section talks about the fact that Arima is one of the strongest ghoul investigators that ever live. But how strong is he really? Well, the easiest way to gauge his power is simply by looking at some of his most notable fights.

At just a tender age of 19-years-old, Arima took part in the defense of the second ward against the legendary One-Eyed Owl. He was the only one who could mortally injure the SSS rated ghoul. It was the first time the CCG managed to defeat such a powerful opponent.

RELATED: Fullmetal Alchemist & One of the Darkest Episodes of Anime

When Ken Kaneki escaped to the underground passage of Route V14 during the Owl Suppression Operation, Kishou Arima was the one who stopped him. Kaneki was consumed by his emotion at that point and fully transformed into the SS-rated ghoul Centipede. But even with all the power in the world, Kaneki is no match for Arima. As a matter of fact, it was a totally one-sided fight. Arima didn’t even break a sweat as he impaled Kaneki’s head and ended his futile struggle.

Why is Arima so Powerful?

So what is the true reason behind Arima’s inhuman powers? Well, the answer is simply because he is indeed not a human. Kishou Arima, along with other people who come from the Sunlit Garden like him, is actually a half-human and half-ghoul. He was bred by the researchers in the Sunlit Garden to be a powerful soldier. He has the insane physical ability, senses, and reflex of a ghoul, but unlike a real ghoul, he doesn’t have a Kagune, and he can eat normal food.

On top of his unmatched physical abilities, Arima also uses several powerful Quinques, which are weapons for CCG investigators that were made out of ghoul’s kagune. Throughout the series, Arima uses two quinque, IXA and Narukami. IXA is a quinque that can freely change itself for both offense and defense purposes, which makes it perfect for close to mid-range combat. Narukami, on the other hand, can shoot lightning bolt that can easily obliterated anything on its path, which is perfect for long-range combat

The innate physical abilities combined with his natural talent in combat, intelligence, and tactical mind, along with powerful weapons are the reason behind his decades of dominance.

What Happened to Arima at The End of Tokyo Ghoul?

Ever since Arima picked up the blade in his early teens, he never tasted defeat. Not even once. There are some ghouls that manage to slip through his fingers, such as the legendary One-eyed Owl. But for the overwhelming majority of ghouls who are unlucky enough to cross paths with him, death is a certainty. The White Reaper never misses its target.

So what does the end look like for such a powerful man? Well, for someone who thrives on the battlefield, there’s only one place he can find a peaceful end, in a battle.

At the later part of Tokyo Ghoul:re, Arima battles against Haise who has regained his memory as Ken Kaneki. At this point, the side effects of his genetic manipulation have finally taken its toll. His body has deteriorated so much to the point that he can barely see out of his right eye. His body is aging rapidly, and it’s only a matter of time before he becomes crippled.

That is why Arima goes into the fight with the full intention of getting killed by Kaneki. However, as usual, Arima completely dominated Kaneki for the majority of the fight. Kaneki managed to overpowered Arima at the end, but he refused to kill the man that he considered to be not only a mentor, but also a beloved father figure. So Arima decided to cut his own throat. In his dying moment, he revealed his secret and what the Garden has done to his body to Kaneki. And finally, the white reaper breathed his last breath with a peaceful smile on his face.

Love and Thunder Confirm How Long a Cake Can Stay in...