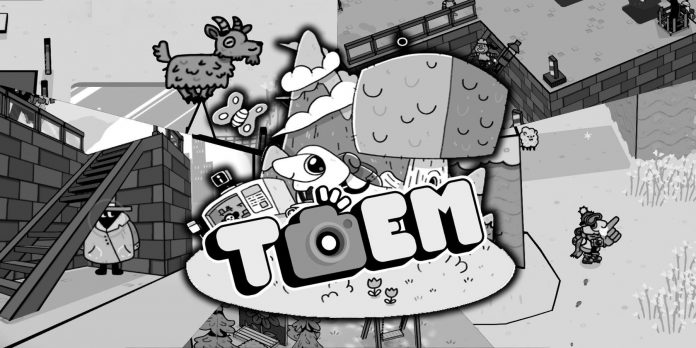 Become a paparazzi Become a flower Missing socks Monster Detection Magazine Blocks the way Take a picture of the beauty of the hotel Photo Call No. 1 Photo Call No. 2 Hide and Seek Ghost Assistant! The brave champion of the Stallions Cup became a scout. Suspicious activity – Chef of the Forest Hotel

For those who love charming indie games with amazing hand-drawn graphics, Toem is a dream come true. The game encourages players to take their time, assessing the environment and completing quests to uncover the secrets of the game world.

There are several quests in Toem that players will take automatically, this is one of them. It will be added to the quest log when you first arrive in Oklaville. The instructions are quite simple: “Take a good photo of a DJ.”

The DJ can be found in the club. From the hotel, go three times to the right and once up. If the bouncer won’t let you through, put on ghost glasses (obtained when players first go to the cemetery) to get past him. Go up to the DJ (Moose) and take a picture of him to complete this quest.

Players will automatically receive this quest when they first get to Oclaville. The hint to the photo is “Photosynthesis time”.

From the hotel, go twice to the right (there will be a tree with a beehive hanging from the tree). At the bottom of this area there will be a wooden photo shoot with a flower painted on it. Interact with the frame to go to the hole and get the camera. Turn on the selfie mode and take a picture of the main character next to a wooden board.

This quest can be taken from a sad sock puppet sitting on a bench at the side of the hotel. He will tell a story about how he went swimming, and when he returned home to dry his socks, one was missing.

Players will need to get ghost points before they can complete this quest. From the hotel, turn left three times to the cemetery. The skeleton will automatically give players points when they arrive. Equip them and go back to the right twice to get to the area with the Mushroom House. (If the house has not grown yet, a sprout will stick out of the ground, from where it will eventually grow.) Talk to the Ghost standing at the picnic table with flower pots, and he will offer to play the game “Socks in a cup”.

Agree to play, and the flower pots will start to shuffle slowly. Underneath it is a pair of wet socks. When the pots stop, choose the one with wet socks to get socks as a prize. Return the socks to the puppet to complete the quest. Since he now has two wet socks, he will give the player one as a reward.

Players take this quest from a child standing in the lobby of the hotel. He will tell the players all about the “Monsters” and ask for help to photograph four of them in different cities. Monsters don’t like to be seen and will only come out when the main character is not visible, so you’ll need a tripod for all this. (Players receive this item after completing the first photo call). When the tripod is removed, the camera view will be from the tripod itself, which allows the character to remain hidden during shooting.

From the hotel, go right twice to where the beehive is located. Bushy will hide in the trees on the right (he will be a shadow figure). Place the tripod in the center of the area and hide behind a wooden board with a flower painted on it. When he hides, Bushy will come out. Equip a camera and take a picture of them.

In fact, this is a Loch Ness monster, and it is located in an area with a Shy hippopotamus and a photo call scout No. 3 (from the bus stop, go left twice). Place the tripod next to the behemoth and go down to the sandy area, out of sight. Open the camera and when the Sucker comes out of the water, take a picture of her.

Sui is located in an area with skaters (from the newspaper building, go left once). It will pop out of the sewer cover on the lower level, so put the tripod anywhere within sight. Hide behind the wall and equip the camera. When she appears, take a picture of her.

Tally is located in the windy area of Küruberg. From the balloon family home, go up once and then right twice. Players will need a Honk attachment to break ice blocks to get through. (This item is given to the player after completing the “Resolve Chaos” quest in Stanhamn).

In an open area, place a tripod near a rock and smash a boulder behind a ledge with a Honk attachment, which will allow the player to hide. Put on your camera and, when Tally appears, take a picture of them.

Kim Kardashian “tried everything” to make her marriage with Kanye West...