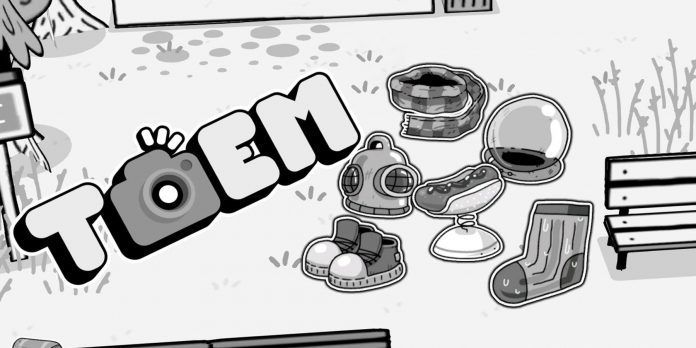 While Toem’s main focus will be on photographing cute critters and townspeople, there is an achievement for putting on all the wardrobe items at least once. A total of 23 items can be worn, but a maximum of 22 will be displayed in the game inventory, since the two items for the head are interchangeable (players can only have one of the two in their inventory at the same time). All these items will be obtained in various ways, from completing quests to interacting with non-player characters in each zone.

Of the 23 items found in the Volume, one is in Homeland, six are in Oakville, eight are in Stanhamn, four are in Logcity and the last four are in Kiiruberg. Here’s how players can track them all.

These shoes are in a gift box that can be found behind Nana’s house. Players will need them to complete a quest with a farmer who stands next to one of the square-topped trees at one of the houses.

This hat is in a gift box inside a small mushroom house, which opens after photographing a Space Cube. The space cube is located under the stairs to the left of the hotel, with a picnic table and pots with plants. Stand on the side of the stairs to see it, then take a picture of the Cube. When you’re done, the Mushroom House will appear. The gift box is located in the right rear corner.

This cap is a reward for completing the “Become a Scout” quest. Start the quest by talking to the Scout leader at the camp (from the hotel, go right once).

They are automatically given to players when they visit the cemetery for the first time. From the hotel, turn left three times to get to the cemetery. They are also required to complete multiple quests throughout the game.

After receiving, go to the area with a picnic table and plant pots. After putting on your glasses, talk to the Ghost at the picnic table and complete the “Socks in a Cup” game. When the game is over, players will get wet socks. Return them to the sock puppet. He will keep one for himself, and give the other to the players as a reward for their help.

This item can be found in a gift box behind the hotel. Go around the right side where the sock puppet is sitting on the bench to get to her.

This is a reward for completing the Monster Detection task. This quest starts in Oklaville and players will need to travel to different locations throughout the game to complete it. Talk to the boy in the lobby of the hotel to start the quest. When all four monster photos are taken, show them to the boy and he will reward the player with a monster mask.

Before players can get this helmet, they first need to restore electricity to the hydroelectric plant. To get to the factory, you will need a Honk nozzle for the camera. (Complete the “Resolve Chaos” quest at the lighthouse to get it.)

At the hydroelectric power station, go inside and go to the right, where a worker is standing next to a large electrical box. Complete the quest “Lack of Energy?!” with him, and electricity throughout Stanhamn will be restored. Exit from the hydroelectric power station. From here, go right once and then down once to reach an area with a tall building and a crane in the center of a small island.

Next to the tower is a box, above which there will be a chat bubble. Interact with this crate to get the Ocean Trash quest. To do this, players will need to use their camera to look at piles of garbage in the water until the circle in the middle of the screen fills up. Each pile of garbage will turn into something as soon as the circle is filled. One of them turns into a treasure chest. When the treasure chest appears, open it and there will be a diving helmet inside. This Helmet is necessary to complete the quest “Queen of Paper Hats”.

The fisherman’s hat is in a gift box on the first floor of the Lighthouse. From the bus stop, turn left 3 times to get to the Lighthouse. This will be the only section where it rains.

The Honk app is required to get this hat. As soon as the player has a device, use it against seagulls attacking the ferry driver, right above the bus stop. Take the newly cleaned ferry up to the hydroelectric power station. Go inside and there will be a gift box right next to the worker sitting on the bench. The helmet is inside the gift box.

These two hats require a diving helmet and a bugle.

House of the Dragon: Some Very Important Characters That Are Rarely...