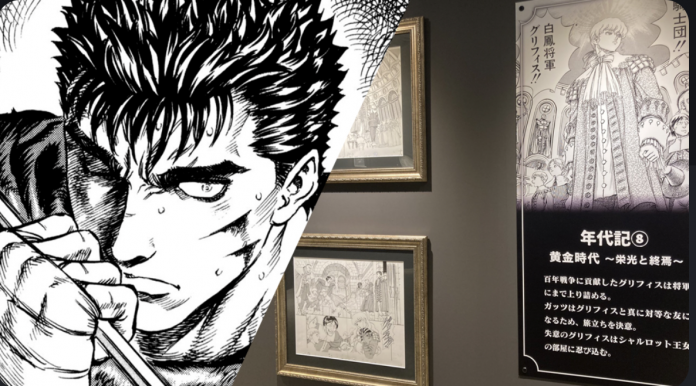 The departure of a great
A few months ago we received the terrible news that Kentaro Miura, the mangaka responsible for giving us the great Berserk series, had passed away. His work is one of the most recognized in Japan and the world, and has served as inspiration for other media such as anime and video games.

Although it left Berserk unfinished, chapter 364 of the manga arrived recently, the first to be published after Miura’s death. This is apparently the end of the decades-long history between Guts and Griffith. However, this will not be the last we will see regarding the popular series, as an exhibition of it is in preparation in Japan.

An exhibition to celebrate Berserk

From September 10 to 23, an exhibition dedicated to Miura’s most popular creation is open to the public. Here, fans will be able to see a great deal of art that was created for his production, as well as various statues of various characters and fearsome demons that made their appearance in both the manga and anime.

The exhibit features art from the entire history of Berserk, both past and present. In addition, there is also new art created just for this show, so fans of the series will have a lot to marvel at. Who knows what kinds of great works of art have inspired the dark fantasy world of Miura.

Twitter user Young Animal Haku shared a series of photos about the Berserk exhibition and promised to upload more once it opens. The photos show us that they really treated Miura’s works as works of art worthy of a museum. It is impossible to see the arrangement and not think that we are seeing something within a cultural enclosure.

According to Haku himself, some people are calling the exhibition a masterpiece and saying there is nothing like seeing it live. Unfortunately for Western fans, there are currently no plans to bring this Berserk exhibition to this side of the world. Do you join a coperacha so we can all go to see her in Japan?

The Elysium Clan claims the World’s First Destiny 2 Crown for...