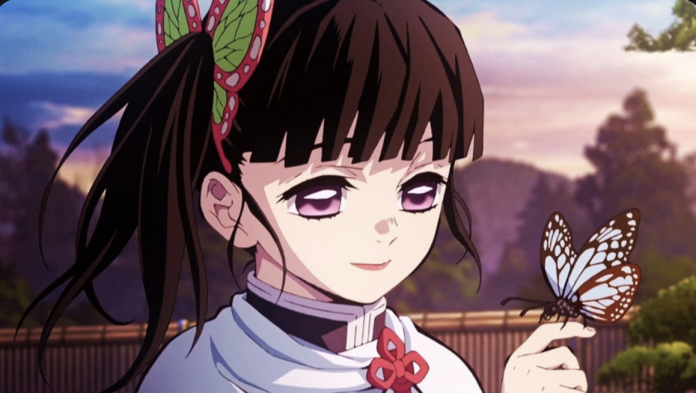 This cosplay that we share with you of Kanao Tsuyuri from Kimetsu no Yaiba is attached to the details and that makes it stand out.

One of the characters that debuted in the first season of Kimetsu no Yaiba was Kanao Tsuyuri. She is a skilled demon hunter, but she hardly speaks.

All due to a trauma she suffered in her childhood. When she was little she was rescued by Kanae Kocho, Shinobu’s sister, the Bug Pillar.

So she decided to raise her and cared for her with love and care. But she never managed to get her to recover 100%. When Kanae died, Shinobu took her place.

Kanao Tsuyuri stands out a lot in Kimetsu no Yaiba

So she trained her in swordplay. Kanao became an expert in combat and proved it by passing the exterminator exam without difficulty.

She also helped the training of Tanjiro Kamado, the protagonist of the story. Despite the fact that she failed time and time again, her determination and dedication allowed him to overcome her. In the final test she gently put a cup of tea on his head, which surprised her.

Towards the end of the first season of Kimetsu no Yaiba it was shown that Kanao Tsuyuri feels something about Tanjiro. She was very impressed with his frank and kind way of expressing himself. He is someone very different from her, who is more reserved.

To the extent that she uses a coin to make decisions. But it seems that her encounter with this boy managed to give her some security and we will have to see how she evolves in the second season. This cosplay sticks to the image of this jacket

Although those who read the manga surely know what will happen. Kanao is a popular character within the series and because of that there are many fan arts and cosplays based on her.

In this case, we bring one of them, in which she is played by cosplayer Min_MMU.

As can be seen, the costume that she wears is very similar to that of the manga and anime, highlighting the white cape that she always wears. Her hairstyle is also correct and so is the adornment in her hair.

This one is shaped like a butterfly. This insect is very related to this demon hunter and usually uses one of her as a messenger. The one that appears in the photo is a nice touch.

Something that complements this Kimetsu no Yaiba cosplay are the wisteria flowers that appear in the photograph. These have great significance in the series, since demons cannot get through them.

On average this cosplay is decent and takes into account all the details.