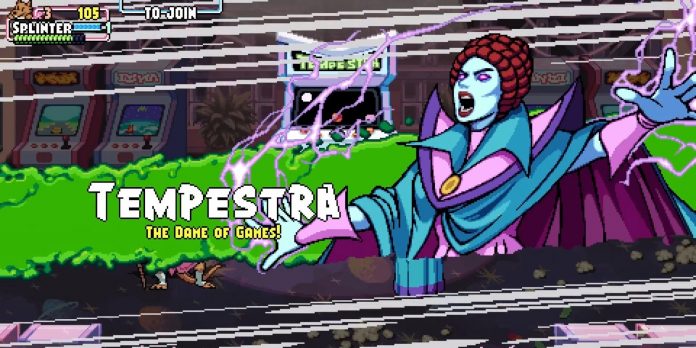 In TMNT: Shredder’s Revenge Tempestra is one of the bosses that the Ninja turtles and their allies must defeat, as she is one of the minions working for Shredder in the beat ’em up game. Tempestra is a recognizable villain from the TV series “Teenage Mutant Ninja Turtles”, and she is just as dangerous in “Shredder’s Revenge”. Tempestra was originally from a Ninja Turtles video game called Tempestra’s Revenge. After the game was struck by lightning while Leonardo was playing it, Tempestra came to life and has been the antagonist of the Ninja Turtles ever since.

Tempestra is the main villain of the sixth episode “The Mall”. Although stopping Tempestra is the main goal of the episode, TMNT and other playable characters in Shredder’s Revenge can perform a number of additional challenges that also occur in “Mall Meltdown”. As in other episodes of TMNT: Shredder’s Revenge, players will have to complete three additional tasks. The first is to complete the level without using super attacks. The second task is to defeat five enemies with sliding attacks. The last task is to throw enemies to break one coat hanger.

There are also five hidden secrets to be found in the 6th episode of TMNT: Shredder’s Revenge. Before the ninja turtles get to the battle with the Tempestra boss in TMNT: you can find “Shredder’s Revenge”, “Secret Diary”, a videotape, a cameo of Napoleon, a cameo of Vernon and a Disgusting Bug. The secret diary can be found shortly after the start of Episode 6 by smashing the trash can to the left of the Taco counter. Continuing the episode, a VHS cassette is located outside a Random Clothing store inside a trash can between two plants. Then click on the cardboard cutout of Punk Frogs to make a real Napoleon cameo. After that, Vernon’s cameo can be found in the game room by clicking on the popcorn machine. Finally, shortly after, the Disgusting bug can be found in another popcorn machine.

How to Defeat Tempestra in TMNT: Shredder’s Revenge

Tempestra herself has only one attack, which involves summoning pink electricity to kill TMNT. However, during this boss battle in TMNT: Shredder’s Revenge, Tempestra will summon two arcade minions to fight for her. In addition, it will become immune when it becomes holographic.

To defeat Tempestra in TMNT: Shredder’s Revenge, players need to defeat the thugs she summoned to make her vulnerable again. As her health drops, Tempestra summons both minions at the same time. Defeat them quickly and then unleash a barrage of attacks to put an end to Tempestra.

Dwyane Wade worries about his daughter Zai’s safety “every time she...