Home Entertainment TMNT: Shredder’s Revenge – A guide to the location of all VHS... 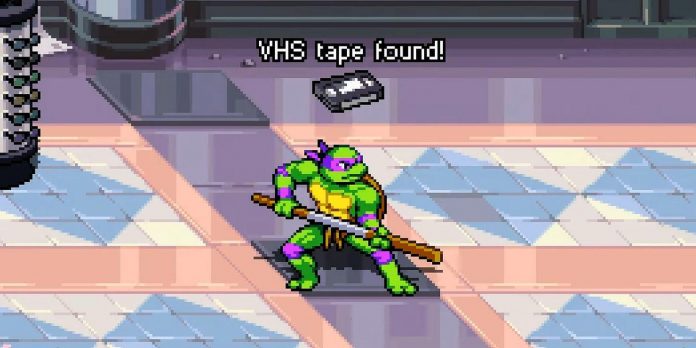 The videotape is a collectible in the game Teenage Mutant Ninja Turtles: Shredder’s Revenge, which serves as a quest item necessary for Vernon’s special request. Completing this quest will reward players with 100 points, which they can use to level up their characters. VHS cassettes are located inside destructible objects such as trash cans or crates. Fans learn that they have discovered one of Vernon’s collectibles in TMNT: Shredder’s Revenge when the text “VHS cassette found!” appears above their character’s head accompanied by a black rectangular tape cassette icon.

As with other NPC-related side quests, in Teenage Mutant Ninja Turtles: Shredder’s Revenge, players must first find Vernon to fulfill his request, and then receive a reward. Vernon is in the Crystal Arcade at the Crystal Palace Mall during “Episode 6: The Mall”. At the arcade entrance point, players will encounter a popcorn cart standing next to the entrance. Smash this object and Vernon will pop out, allowing fans to start hunting for a VHS tape.

Below is a list of places where you can find each VHS cassette in TMNT: Shredder’s Revenge:

Videotape 1: Episode 6 — Crystal Palace Mall — While exploring the mall, players will pass by the Casual Clothing store. To the right of the entrance to this store is a trash can between two vases with plants. Smash the trash can to find the videotape. Videotape 2: Episode 7 — Roofs. Crossing the treacherous roofs of Episode 7, players will stumble upon an orange cone next to a large rectangular hole. Use the attack in TMNT: Shredder’s Revenge to open the toolbox to the right of the cone to get the next VHS cassette. VHS Cassette 3: Episode 10 — Silicon Alley — coming out of a dark alley, players will encounter a group of boxes and crates at the entrance to the alley. Smash the second box with the marked feet to find the videotape. Videotape 4: Episode 11 – Museum of Natural History. After avoiding the stampede of triceratops in the halls of the museum, find a magazine stand next to a giant skull with horns on the wall. Destroy the stand to find the fourth videotape. Videotape 5: Episode 13 — Balarathon. In TMNT: Shredder’s Revenge, in a prominent place next to the enemy tower, you can find a box with marked legs that moves from side to side. Smash the drawer with the latest VHS tape.

90-day Groom: the loudest news from the franchise (week of June...