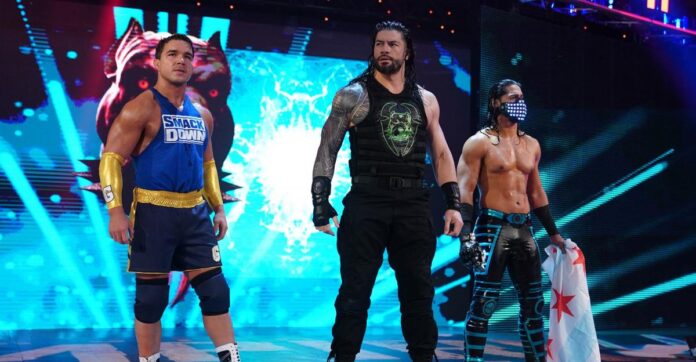 – Shorty G fought twice in the last episode of Friday Night SmackDown. First, he tried to achieve victory in the Royal Battle to face Daniel Bryan, and then he defeated Cesaro in an individual fight. Despite missing the opportunity to fight for the Intercontinental title, Shorty G acknowledged that, at least, he had his reward beating Cesaro. You can see the video with their statements at the top of the news.

– WWE has confirmed that next week Alexa Bliss and Nikki Cross will bring into play the WWE Women’s Tag Team Championship against Bayley and Sasha Banks. In the last episode of Friday Night SmackDown, Sasha Banks beat Alexa Bliss in a solo match. Nikki Cross and Bayley watched the match from the commentary table.

– The SmackDown segment that had the most impact last night on social networks was that of Jeff Hardy and the car incident with Elias. However, the moment of the pool between Otis and Mandy Rose was not far off. You can see it below.

– Tehuti Miles achieved his first television victory in WWE. He defeated Danny Burch in an individual match held in the last episode of 205 Live. Miles has been fighting on Raw and NXT for the past year and only managed one win against Cal Bloom at a live show held in November 2019.

– Today is Jake “The Snake” Roberts birthday. The WWE Hall of Fame member turns 65, was born on May 30, 1955 in Gainesville, Texas. No Way Jose (32) is also celebrating his birthday.