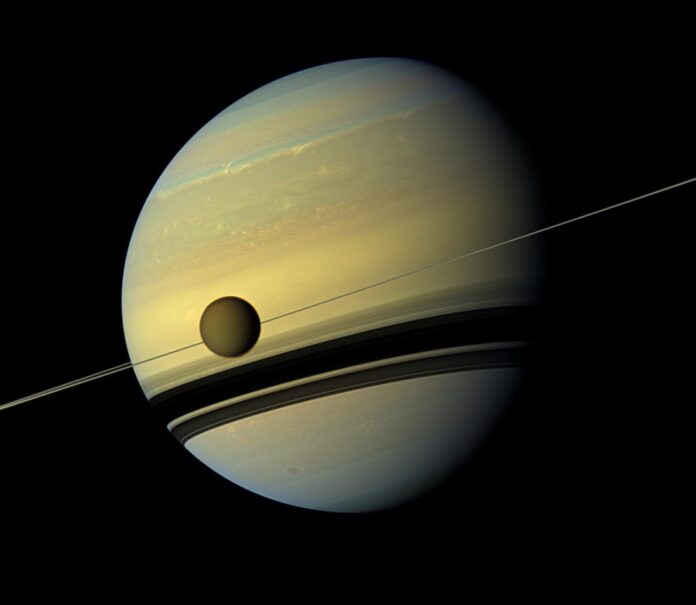 A new study of Saturn’s atmosphere and its satellite Titan, which is a remarkable place with its sea and rivers, shows that the satellite is moving away from Saturn 100 times faster than expected.

Saturn satellite Titan is in the focus of scientists as it is thought to have a suitable environment for the development of life. The satellite, which is a big celestial body even from Mercury, which is the closest planet to the Sun, has a thick atmosphere and hosts rivers and seas made up of liquid hydrocarbons such as methane and ethane.

There is a thick layer of water ice under the rivers and seas of Titan. Scientists think there may be a water ocean beneath this ice sheet that can accommodate life. Therefore, scientists have been working on Titan for a long time.

In an article published in the journal Nature Astronomy on June 8, scientists explained that Titan was moving away from Saturn 100 times faster than previously known. According to the study, Titan, which was very close to Saturn when it was formed, moved 1.2 million kilometers away from the planet in 4.5 billion years. This corresponds to about 3 times the distance between the Earth and the Moon.

The relationship between the Moon and Earth can be looked at to understand Titan’s departure from Saturn.

To better understand the change in the orbit of satellites, we can look at the Moon, the satellite of the Earth. The moon exerts a weak force on Earth. However, this weak gravitational force of the Moon is the force that creates the tides on Earth.

Titan goes away from Saturn by experiencing a process similar to that of the Moon.

Titan applies a gravitational force to Saturn just like the Moon has applied to Earth. However, Saturn’s friction processes are weaker than Earth due to the gaseous composition of the planet. Earlier theories based on this suggest that Titan was 0.1cm away from Saturn annually. However, the results of the new study show that Titan moves away from Saturn much faster than thought.

Scientists working on Titan’s trajectory have used a new technique to measure Titan’s trajectory over the past 10 years. The technique called astrometry produced precise measurements of its position relative to the stars in the background of Titan in the images taken by the Cassini spacecraft. Another method called radiometry measured the speed of Cassini, which was affected by the gravitation of Titan.

Valéry Lainey, one of the researchers who participated in the study, summarized the success achieved through the use of astrometry and radiometry methods as “We have achieved completely compatible results using two completely independent data sets and two different analysis methods”.

The results of the study are in line with the theory put forward by Jim Fuller, who predicted that Titan’s departure from Saturn was much faster than previous theories. Fuller’s theory suggested that while swinging on a swing, swinging your legs at the right time would allow the swing to go higher, so Titan was expected to compress gravitationally with a certain frequency that was swinging strongly to Saturn.

This tidal forcing process by Titan is called resonance locking. Fuller thought that the high amplitude of Saturn’s oscillation radiated a lot of energy, which caused Titan to move away from Saturn much faster than previously thought.

The results obtained in the new study show that Jim Fuller’s theory about Titan is correct. According to the calculations of the new study, Titan continues to move away from Saturn approximately 11 centimeters every year.