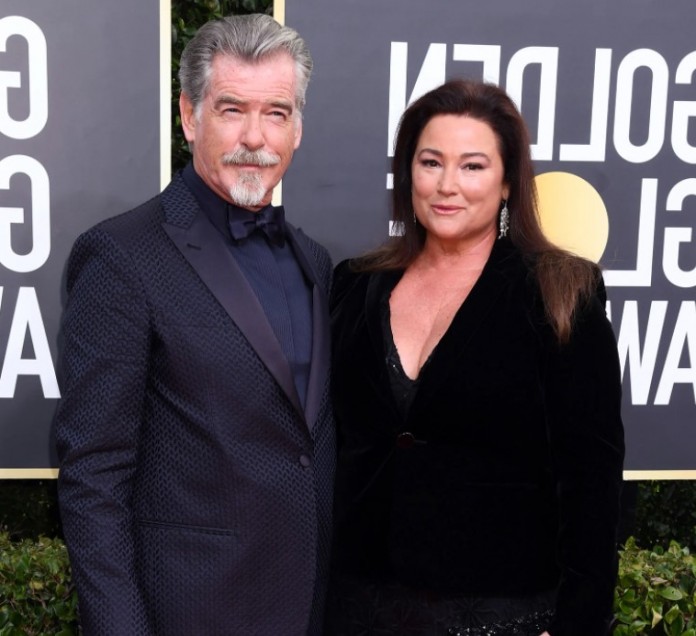 A second chance at love. Pierce Brosnan experienced ups and downs in his personal life, which led to his marriage to Keely Shay Smith, which lasted more than 20 years.

Previously, the actor was married to Cassandra Harris from 1980 until her death in 1991. During the first marriage, Brosnan and Harris had a son, Sean (born in September 1983). The actor also adopted Harris’ daughter Charlotte and son Chris from a previous marriage after their father’s death.

After the death of his wife, Brosnan talked about how to cope with the loss. “When your partner gets cancer, life changes. Your schedule and the guidelines for your regular activities and how you look at life, it all changes,” he explained in a 2008 interview, noting that his family “treasured every moment” they spent with Harris. “Cassie was very positive about life. I mean, she had the most amazing energy and outlook on life. She could read people very well. She had, above all, the greatest sense of humor. She had a wonderful laugh that her children inherited.”

The Golden Globe nominee found love again after meeting Smith during a trip to Mexico in 1994. After almost seven years of dating, the couple exchanged vows in 2001. They also added their sons Paris and Dylan to their family.

During an interview in 2008, Brosnan reflected on how he found happiness in his life amid great grief. “I have been very lucky in my life. I was able to go through quite a lot of lives and still retain a certain identity and love of life,” he shared at the time. “I also have a new awareness as a man and as an actor: “Your place is here.” It’s a great feeling to know that you don’t have to show yourself or step on your toes to be seen or heard. Just to feel comfortable with who you are.”

For the star Mrs. Doubtfire, meeting her second wife was something that had to happen.

“I had a great marriage, which unfortunately had its own end, and I was lucky enough to find love again. We were destined to find each other. I thank God for her every day,” he told Closer in January 2018. “When Keely looks at me, I get weak. I love her vitality, her passion. She has a power that I couldn’t live without.”

The journalist, for her part, also spoke about the family she created with Brosnan. “@piercebrosnanofficial thank you for joining me on this wild and joyful journey to motherhood, for your love, support and encouragement. Your heart is so big, so generous, so tender and compassionate. You inspire me every day and keep laughing. Be healthy! My heart is overflowing with gratitude,” Smith wrote in a sweet tribute to Father’s Day on Instagram in June 2021.

Scroll down to relive Brosnan and Smith’s romance:

The couple crossed paths in Mexico and soon after a chance meeting began dating.

After three years of dating, Brosnan and Smith had a son, Dylan Thomas.

Smith gave birth to her second child, Paris Beckett, in 2001.

The couple tied the knot at Ballintabber Abbey in Ireland.

Brosnan and Smith attended the Academy Awards in 2004.

The couple posed during a performance in Malibu, California.

The couple looked at each other only at the screening of the movie “Love is all you need.”

During the interview with Closer, the native of Ireland talked about how to find the right person with whom you can spend your life. “You have to trust your heart and follow it,” he shared then. “And try to meet the best people in life.”

He added: “I’ve been a married man for most of my life — I like that. I’m one of those guys who thinks you need a strong woman in life.”

Smith, for her part, noted: “Pierce is smart, charming, and his real beauty comes from the soul. And, like a good wine, it ages beautifully.”

“Happy anniversary, my dear Keely, my love is forever growing with you… ☘️ ❤️ ,” the Mamma Mia actor wrote about his wife on Instagram.

Brosnan reflected on his marriage, writing on Instagram: “Twenty-eight years ago, on this day, the 4th of the 8th, we met in Cabo San Lucas, Mexico… and got married in Ireland, at Ashford Castle, three years later, on the 8th of the 4th… 4884. …my love always, you have made my life joy and happiness, the light of my life, love.”

Frozen 2 becomes the most popular animated film in history!