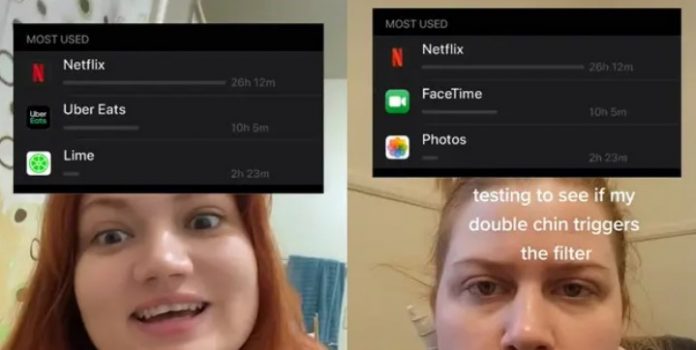 TikTokers around the world criticize the filter that guesses your most frequently used mobile apps, claiming that it “shames” users.

Behind some of the viral trends that permeate TikTok are some of the most popular filters that are usually created manually by the creators on the platform.

The last filter for the app tries to guess your most frequently used mobile apps by listing the top three in the process.

However, many TikTokers claim that it “shames” users by adding a food delivery app to the list.

On October 2, TikToker lgbtavenger uploaded a video with the filter. In the text superimposed on the video, she said: “I keep seeing fat people getting McDonald’s and UberEats, so I wanted to test that.”

She then launched a filter that quickly listed Netflix, Uber Eats and Lime as her most frequently used apps.

In another text overlay, she called the results “fat-phobic.”

Another TikToker, who goes by the name Oliveandfern, uploaded another video to test the theory by running a filter hiding his double chin, and a second time with a facial expression that shows a double chin more.

The first time the filter showed Netflix, Facetime and Photos, and the second time — Uber Eats, Netflix and Spotify.

I have so much room for snacks in there

While many people flooded the comments with similar experiences, others pointed out that the filter is completely random.

“I have Uber and McDonald’s at the same time without it,” one user commented.

Another said: “I don’t know what I’m doing wrong because I’ve never had food apps and I’ve tried 20 times with my double chin.”

“My says BeReal… I don’t even know what kind of app it is… I think it’s random,” said a third user.

Galaxy Buds Pro Would Have Caused Ear Inflammation In Tsers