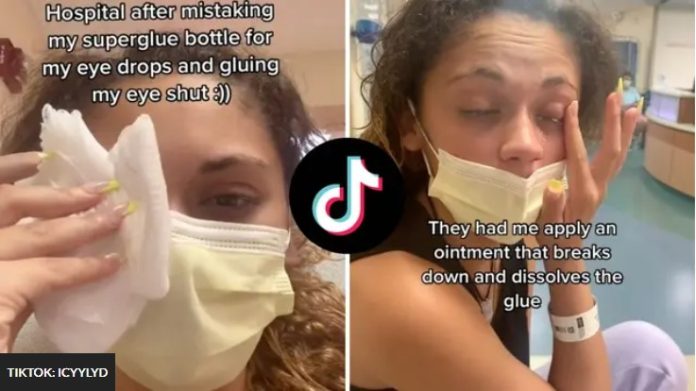 Content creator Lead went to TikTok to share a series of photos depicting the aftermath of the incident. “The hospital after mistaking my bottle of superglue for eye drops and taped my eye,” she wrote in an overlay of text in her video.

In the 52-second clip, which has racked up more than 4.6 million views, Lead explained that she accidentally taped her left eye when she woke up and reached for what she thought were eye drops.

TikToker showed photos of her closed left eye as she sat in a hospital bed. The hospital tried to open her eyes in several ways, including ointment.

“They forced me to apply an ointment that destroys and dissolves the glue,” said Lead, “but it didn’t seem to work, so the medical staff had to resort to other measures.

“It didn’t work, so they started picking at the glue, trying to separate my eye,” she said. The video shows how the doctor carefully works on her left eye.

In the end, the staff was able to “pry” the eyelid with a special tool. “They took me to a separate room and used a metal tool to open it and finally opened it,” explained Lead.

She then showed images of her eye after it was opened, adding that she was in “so much pain” after the ordeal.

In the comments, many TikTok users shared similar stories.

“Damn, and I thought my sister was sick because my mom put ear drops in her eyes instead of eye drops,” one of them wrote.

“It happened to me once, I accidentally grabbed E-juice for my vape, got to my mom’s room in tears, she was sleeping… I am 21 years old,” another commented.

“Girl, I did it once. I was wearing contact lenses and they were glued to my eyelid,” a third shared.

In the following videos, it can be seen that Lida’s left eye has completely healed.

CSI Miami: What we suspected about Kim Delaney’s departure from the...

The ending of the third season of “The Butcher” completely changes...