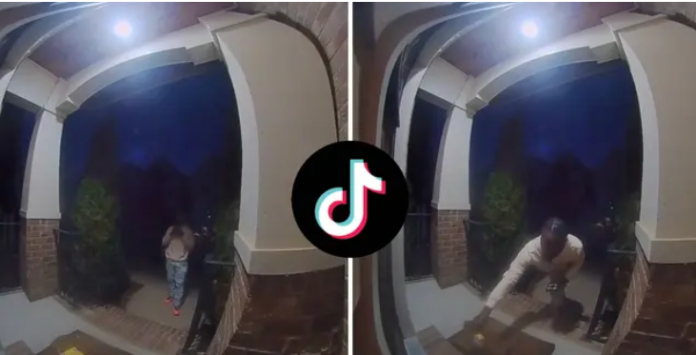 TikToker was shocked to see his driver DoorDash steal his food on a Ring camera after taking a picture of it as “proof” of delivery.

In a viral clip that has gained more than 1.4 million views, content creator joshmallitz posted footage showing his courier approaching his doorstep and leaving a bag there.

DoorDasher then took a picture of it on his phone to send via the DoorDash app as proof of delivery. However, just a few seconds later, he accepted the customer’s order and left.

According to Josh, the Ring camera footage was shot outside his home and it seemed that the driver was trying to give the impression that their food delivery was complete.

He wrote in a text overlay for the video: “TikTok, please use your detective skills and find out who it is. I ordered on DoorDash, and he immediately settled my order.”

“Can’t get a refund because he took a picture saying it was delivered… what a bastard,” Josh signed the video.

Can’t get a refund because he took a picture saying it was delivered.. what a scumbag #fyp #foryoupage #olemiss

TikTok users couldn’t believe that the customer couldn’t get a refund.

“Why do people always say they can’t get a refund? Even if it was delivered, if you say the food was cold, they return the money every time,” one of them commented.

“Can’t you send them this video? I’m confused,” wrote another.

Others wondered why the courier took the food.

“I would like to know what made him do it… for example, it was really good food, he was just starving or maybe he didn’t like your tip,” said one user.

“Maybe he was hungry… I don’t think these drivers are being paid enough,” another added. — I’m sure he feels guilty now.

In the comments, Josh said that in the end he was able to return the money for the stolen order.

“I ended up getting a refund,” he wrote, “but I wanted to spread the word about it because some people don’t have cameras and they won’t be able to get a refund.”