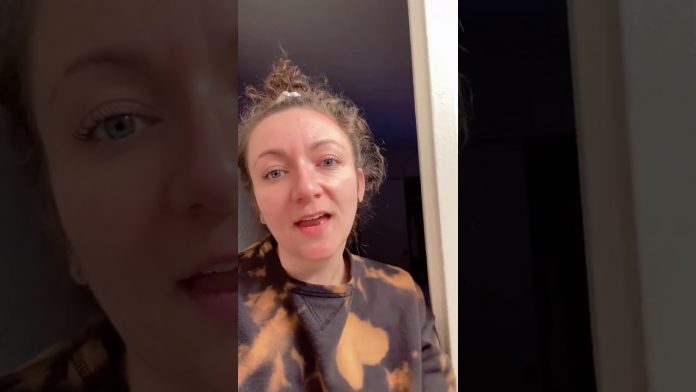 TikTok user Samantha Hartsoe went viral after she discovered a hidden room behind the bathroom mirror in her NYC apartment and posted a video where she reminded some people of the horror movie Candyman.

Because people have heard many scary stories over the years about such strange hidden spaces in their homes or apartments, finding a secret abandoned room is often the last thing people want. That’s exactly what happened to TikTok user Samantha Hartsoe, and people went absolutely crazy.

In her first video, she tells that she was in her bathroom one day and realized that a cold wind was blowing on her. She says she checked the vent and its surroundings but couldn’t find a reason. She says.

Samantha then realizes the air is coming from the mirror and calls some of her friends to show what’s behind.

When she moved away from the mirror, a square hole appeared. At first it looked like a cable connection, but as she pushed her phone through the hole, she finally found a whole corridor, screaming that there was a room.

At the end of the second video, TikToker is getting ready to go through the hole while trying to figure out what’s on the other side of the bathroom wall. More than 14 hours have passed since she uploaded her last video, and some reviewers joked “I hope she’s back”.

The creepy video also led people to compare it to the 1992 horror movie Candyman; In this film, her name can be repeated five times in the mirror and the lead character can be called. Samantha’s TikToks got some people thinking about the scary scenes from the movie set in front of the bathroom mirror and drove them even more crazy.

Me watching that women climb through her apartment bathroom mirror on Tiktok knowing Candyman is on the other side. pic.twitter.com/dwX1UlvcVJ

The two videos have totaled more than 10 million views, and TikTok users have now invested in the weird story by asking Samantha to upload the third episode video.

Why Ann Heche’s biography sells for hundreds of dollars after her...

Simulate how it will look in The Last of Us Part...