Home Entertainment TikToker Puts on a Bikini Top at Disney World to Test a... 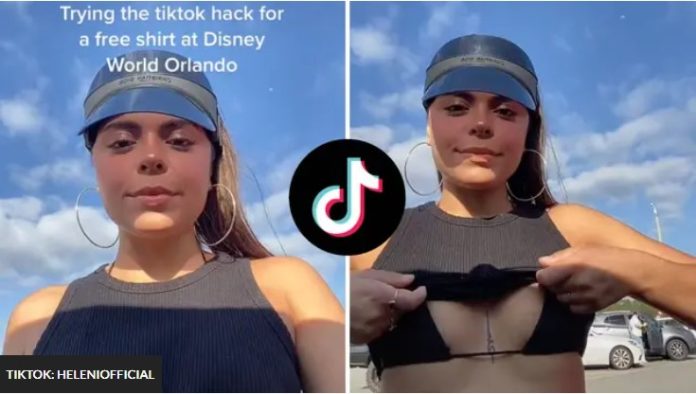 TikToker put on a bikini top at Disney World to check the “hacking” of a virus-free T-shirt, but it completely turned into unpleasant consequences for her.

Content creator Heleni went viral after trying out a popular “hack” from TikTok that suggests wearing an “inappropriate” top at Disney World in Florida will result in the park giving you a free shirt.

In the short clip, which has garnered a whopping 8.6 million views, Heleni filmed herself in a parking lot, taking off her cropped tank top to expose a small black bikini with triangular cups underneath.

“Trying to hack TikTok to get a free shirt at Disney World Orlando,” she wrote under the video.

Heleni then headed for the entrance, but her excitement was short-lived as she was stopped by park staff.

Instead of giving her a free T-shirt, as she hoped, they “forced” her to buy a shirt to cover up before entering the theme park. A disappointed TikToker said the hack had been “exposed.”

According to the park’s frequently asked questions about what to wear to Disney, “clothing that by its nature exposes excessive areas of skin may be considered unsuitable for a family setting.”

In the comments, a Disney employee explained that parks stopped giving away free T-shirts because many people deliberately dressed up to get them.

“The cast is here. It doesn’t work anymore. It became too popular on the Internet, and everyone was doing it,” they wrote.

“They used to give one for free, but then everyone found out about TikTok and abused the system, so they force you to buy one now,” another viewer added.

Others, however, suggested that Heleni did not perform the “hacking” properly.

“How about going to the park first,” one of them wrote. “You made it too obvious,” suggested another.

“You should be inside the park, not outside,” someone else advised.