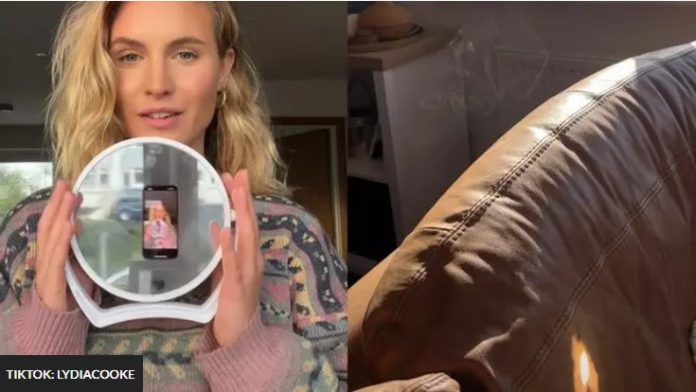 A TikToker user went viral after uploading a video in which she placed her makeup mirror reflecting the sun so that it was about to cause a house fire.

Remember, in a science lesson, your teacher explained how you can use a magnifying glass to control where the sun’s rays are focused?

If so, you will know that this will focus the heat from the sun so much that when an object at the end of it ignites easily, it could potentially catch fire.

TikToker LydiaCooke recalled this with difficulty and quickly went viral after uploading a video with the results.

On November 1, Lydia uploaded a video showing how a sunbeam falls on her sofa, causing it to smoke.

The text superimposed on the video read: “Today I turned several years old when I found out how a house fire could start.”

The video quickly went viral, gaining over 16 million views within two days of being uploaded.

After the video exploded, Lydia revealed that the enlarged half of her makeup mirror was the cause of the reflection, and noticed it when doing makeup without a mirror.

“I was very lucky to be at home when it happened and I will learn from my mistakes,” she said.

Throughout both videos, viewers flooded the comments with their thoughts on the situation.

“I’m a waitress, and an empty water glass on the table broke because the sun hit it once,” one of the spectators replied.

Another said: “This is my biggest fear, every time I go out for a long time, I remove all the shiny things from the windows.”

“A friend’s house caught fire from a glass left on the porch, reflected on a garbage bag, and it caught fire!” commented a third user.

Virgin Galactic: See How To Watch The 1st Manned Flight on...