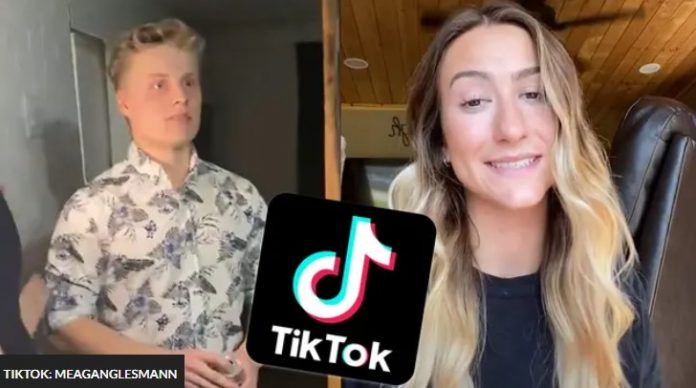 TikToker went viral after uploading a video showing her boyfriend’s reaction to her unexpected appearance at a party, and viewers compare him to the infamous “couch guy.”

The internet started buzzing in the fall of 2021, when the guy from the TikTok sofa went viral in the short video app.

In the video, his girlfriend surprises him at a party, and viewers quickly believed that the couch guy was there with another girl because of his reaction to his girlfriend’s appearance.

TikToker Meagan Glesmann went viral almost a year after uploading a similar video, and viewers expressed their concern about her boyfriend’s reaction in the comments.

TikToker went viral with a surprise boyfriend in the style of a “couch guy”
Back in September, Megan uploaded a video in which she surprised her boyfriend by unexpectedly appearing at a party.

Soon after, viewers took to the comments to express their concern about her boyfriend’s facial expression and reaction to her arrival, comparing the guy to the infamous “couch guy.”

One of the users replied: “You saw the couch guy… representing the dude in the doorway.”

After the video went viral, Meehan posted a response to people claiming that he was cheating on her.

“Yes, this is my boyfriend’s real reaction to me surprising him. I just texted him a few minutes before, saying I was going camping, so I won’t be able to talk to him for the rest of the night,” she explained. “So yes, he was in shock. I dyed my hair and tanned myself. It took him a few seconds to figure out what was going on.

“Obviously, you don’t see what happened after. It was like a five-second reaction video. There was no other girl, no one cheated. We’re doing great, I just thought it was funny.”

After the update, many viewers had doubts about the loyalty of the boyfriend, but others noted that these are just assumptions.

Anyway, Meagan says there’s no problem between her and her boyfriend, so we can assume this is the end of the “door dude” saga.

A Journalist From Boston Describes “4 Scenarios” For FSG and The...