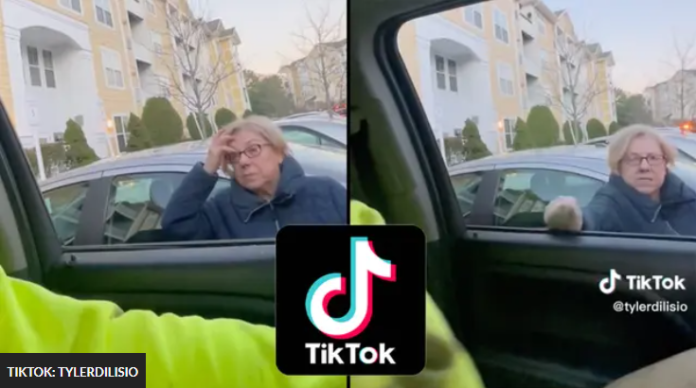 TikToker went viral on the social media platform for perfectly handling the harsh “Karen” after a dispute arose over a parking spot.

The TikTok world has proven time and time again that it likes to see the unreasonable and rude “Karen” humiliated.

From “Karen” trying to board a Disneyland attraction through the exit, to ruined weddings with unbearably loud music — there is no shortage of reasons explaining why the Internet is everywhere against annoying “Karen”.

Viral TikTok offered another excuse to challenge “Karen”: user tylerdilisio shared a video of a neighbor behaving rudely and aggressively in a dispute over a parking space.

TikToker reported that they had just returned home from work and parked in their “paid place” when they were challenged by an unknown woman who demanded to vacate the place.

“I got your plate, you’re going to be in big trouble,” the woman threatened, pointing at Tyler. “You’re sitting in the car, I need to park here. Well, come out. You don’t have a car pass.”

Despite TikToker’s attempts to explain that he parked in the parking lot legally, the woman only got angry, saying: “You disgusting piece of shit.”

Keeping surprisingly calm in the face of aggression, tiktoker rolled up the window of his car and ignored her attempts to intimidate him. His only reaction was “your mother” when he was insulted.

The video subsequently went viral on TikTok, currently gaining over 7 million likes. Comments, as a rule, were complimentary to Tyler, praised the way he handled the situation, and especially the aggressive lady.

“There has never been and will never be a more perfect and appropriate answer for Karen!!” said one of the viewers.

Another commented: “Finally someone who doesn’t just let people or Karen talk to them in any way… I approve of this video.”

Despite the widespread lack of popularity, we are sure that this is not the last time we see “Karens” on TikTok.

JakeNBake called Twitch President “out of touch” after meeting with him