Home Entertainment TikToker Films Sister getting Tattoos Left and Right on Her Arms to... 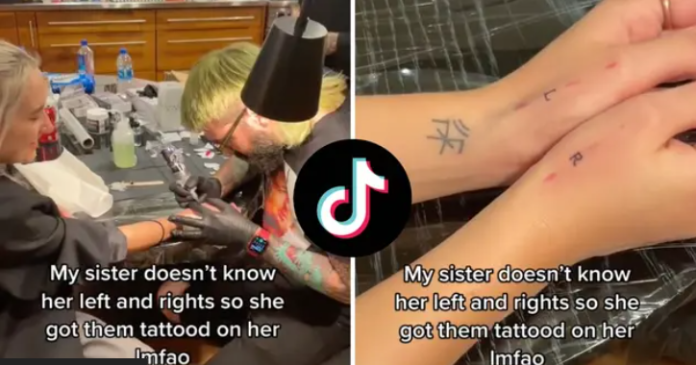 A woman has gone viral on TikTok after her sister filmed her getting tattoos on the left and right on each arm to defeat her “daily struggle.”

A woman who struggled to distinguish left from right put a constant indication of direction on her hands so that she would always remember what is what.

“My sister doesn’t know her right and left, so she’s got them tattooed on her,” read the text superimposed on the seven—second clip. “Lmfao,” she wrote in the caption.

The tattoos were very small letters on each hand and were located just below the thumbs, which allowed Asa’s sister to understand which way she needed to go in the future.

♬ Love You So – The King Khan & BBQ Show

TikTok users reacted differently to what was happening. Some were stunned and could not believe that Asa’s sister had permanently put instructions on her.

“Imagine doing this to yourself,” one user commented. “Even if you have a bad memory, all you have to do is remember which hand you write with and connect the dots.”

“So just making the letter “L” with the thumb and index finger of the left hand is not easy enough?” someone asked.

“I think I’m the only one left on earth who knows what’s left and what’s right without thinking,” wrote another.

Others may refer to Asa’s sister, who struggles to distinguish left from right.

“I need this. Especially when I’m driving. If someone says to turn left, I get confused,” one of the users shared.

“I don’t know left from right either. It’s a fight for life,” admitted another.

“I’m not the kind of person who wants tattoos, but… this may be what I need,” wrote a third.

Kendall Jenner looks unreal in a tiny floral bikini as she...