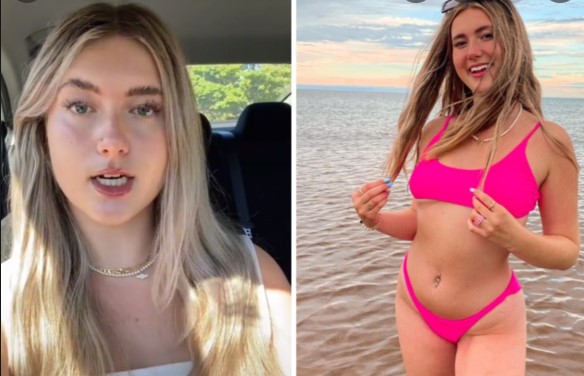 A young TikToker has faced a backlash on social media after complaining that she doesn’t want to work because she is “too beautiful.”

Lucy Welcher, a content creator with more than 80,000 subscribers on TikTok, made a bold statement in an already deleted viral video.

In the short clip, she was sitting in a car with makeup on, holding a drink from Starbucks, and declared that she was too beautiful for work.

“I don’t want to work for the rest of my life,” the blonde said, looking at the camera. “It looks like I want to get up at 6 a.m. every damn day for the next 60 years?”

She then answered her question by saying, “No, I’m too pretty for that,” before taking a sip of vanilla iced coffee.

Lucy captioned the video “None of my business” with a laughing emoji, as well as a couple of hashtags about work.

TikTok users were quick to criticize the content creator for her ranting and attitude to work.

“Try waking up at 4 a.m. every day, working 60 hours a week,” one user complained, claiming that things are much worse for them than for Lucy.

“Someone has the right,” wrote another. “I hope you’ll put up with it, girl, you need it. Appearance has nothing to do with work, and it’s sad that you have such a mentality.”

“How about trying to be an adult instead of a privileged princess waiting for life to be handed over to you?” someone else asked.

Despite the negative reaction, some users quickly agreed with Lucy.

“Preach, sissy!” one joked, and another chimed in, saying, “That’s exactly how I feel.”

“I’m sending this to every employer I’ve ever had,” a third added.

TikToker later took to the comments section of her video to insist that her remarks were “a joke.”