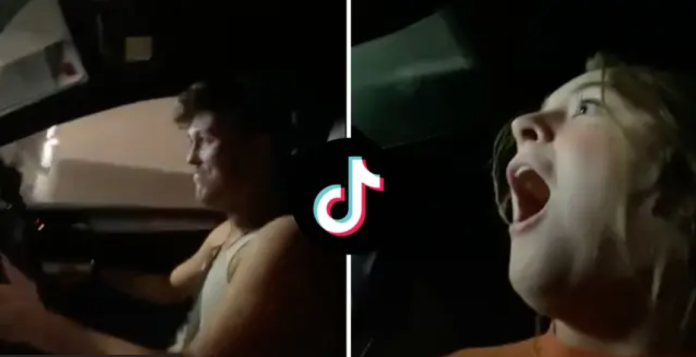 TikToker went viral after getting into a car accident on a Burger King delivery line, just seconds after cursing an employee.

The mentioned TikToker, Mason Daniels (itzmasondaniels), posted a video of him reversing into a car a few seconds after telling a worker to “fuck off.”

In the clip, which has gained more than 4.5 million views, Mason sits in the driver’s seat of his car and asks: “Do you have milkshakes made from pastry dough?”

The Burger King employee replied, “No, we have Oreo.”

He kept laughing as a car honked behind him, until there was a loud crash and the woman recording Mason gasped. The clip ends right after he shouts “F**k!”

#crash in the Burger King drive thru

In a subsequent video, Mason stated that there was “not a scratch” on his car after the accident. He also shared another video saying that “the other car is not damaged” and that the other driver is “fine.”

TikTok users in the comments section did not believe that his car was not damaged.

“It must be a lie that didn’t sound like there was no damage,” one of them wrote. “You could hear the wings crunching in the original video,” another shared.

“I refuse to believe that the damage was 0,” commented the third.

Others criticized Mason for the way he talked to a Burger King employee, calling the accident “instant karma.”

“When you think you’ve done something and karma is already waiting for you,” one of them said. “Instant karma for such an attitude towards an employee,” wrote another.

TikToker responded to the backlash in a follow-up video.

“I’m a waiter myself, I would never be rude to service workers,” he said. “The person in the window was actually a member of my family, so it was a joke on them, and I accidentally turned on the reverse gear, and then it happened.”

Spider-Man 3: Check Out The First Reactions To The Movie

The Netflix Trailer For “The Witcher: The Origin of Blood” Talks...