Home Entertainment TikToker Claims That LA Fitness Banned Him For Life After Locking Him... 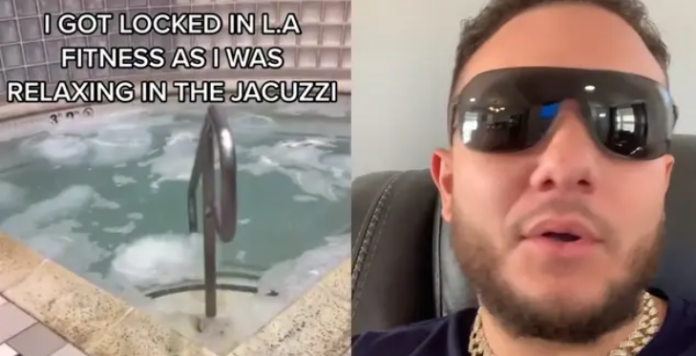 TikToker went viral, saying he was banned from the local LA Fitness center after uploading a video in which it appears he was locked in the gym after closing.

Over the past few years, there have been countless videos on TikTok showing people “hiding” in stores like Walmart and Target in an attempt to stay overnight and explore.

But have you ever thought about what it’s like to be accidentally locked in a store?

TikToker killakevtv says he recently experienced this after a local LA Fitness allegedly locked him inside while using a Jacuzzi, and now he claims the gym has banned him for life.

On October 18, KillaKevTv uploaded a video showing that he was in the Jacuzzi when the lights were turned off, and stated that employees locked him inside the store.

He immediately went to the front doors to see if anyone could help him, where he showed a chain wrapped around the exterior door handles.

“They probably close early on Sundays, no one told me anything. No one went into the jacuzzi area to check if I was here,” he said.

In a second video just a few days later, Kev explained that LA Fitness had seen his original TikTok video and asked him to delete it, to which he replied that he would do so if the gym would grant him three free months of membership.

Then he went to the gym to work out, where, according to him, he found out that he was banned for recording a video, which apparently contradicts his membership agreement.

When the second video went viral, viewers flooded the comments with their thoughts.

“FIND A GOOD LAWYER!! This contract is concluded during BUSINESS HOURS. Just not trapped without permission! Take them!!” one user replied.

Another said, “Locking someone in a building is so illegal that there’s no reason they couldn’t make sure you weren’t there when they closed.”

Many other users also mentioned that because of their reaction to him locking him in the gym, they cancelled their membership.

It is unknown whether Kev will hire a lawyer to resolve this situation, but we will definitely let you know if he does.