Home Entertainment TikToker Claims That an Employee of Marco’s Pizza Pointed a Gun at... 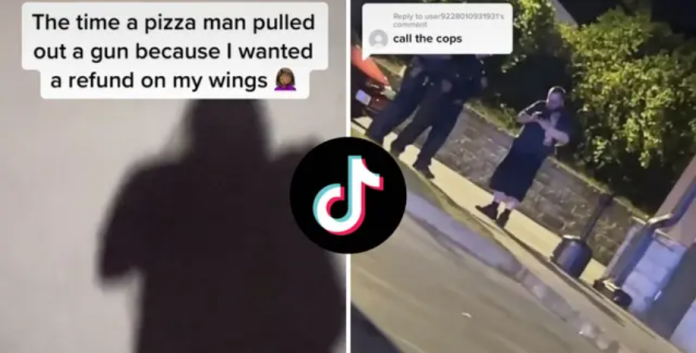 TikToker claims that a Marco pizzeria employee pointed a gun at her after she asked for a refund for her chicken wings.

In a viral video with over 247,000 views, content creator Kai (otayee.ky_) filmed the alleged employee standing outside the restaurant. “The time when the pizza vendor pulled out a gun because I wanted a refund for my wings,” she wrote in a text overlay.

The video begins with the man shouting at her: “I do not know what the fuck you are here for, but this is completely unacceptable. I told you what the hell to do. I’m afraid for my life. Get back in your car, now!”

“Which one?” Kai replied, sounding confused. “That’s how robberies happen!” the man replied.

“This is not a robbery! I’m just asking if I can get a refund?” said Kai.

As viewers were confused by what was happening, TikToker later uploaded a story video explaining the situation.

According to Kai, she ordered chicken wings for takeaway at Marco’s Pizza store. When she came home, she realized that the wings were raw and undercooked.

Then she decided to call the restaurant to return the money or exchange her order for something else, but the store refused.

Kai said she returned to the store to personally solve the problem after the person on the phone was “rude.” According to her, the original video started when she came to the store.

Later in another video, she said that the man called the police to report a “robbery.”

“As a result, he called the police and reported that it was an armed robbery, although in fact it was not,” Kai wrote in the caption. “When the police arrived, nothing was done in this situation.”

In the comments, many TikTok users supported Kai and felt that the man overreacted.

“This guy did the most and was very microaggressive,” one of them wrote. “This is such an overreaction. I’m sorry,” another added.

“He was wrong, this is not a reason to respond with a pistol to a paid client,” commented a third. “It’s traumatic!”

“No one can say anything that would justify him pulling out a weapon. as if she could lose her life,” someone else shared.

CD Projekt Red States that Phantom Liberty is the Only expansion...

Boruto: When will the timeskip happen?