Home News TikToker arrested for sleeping on a pillow in the middle of a... 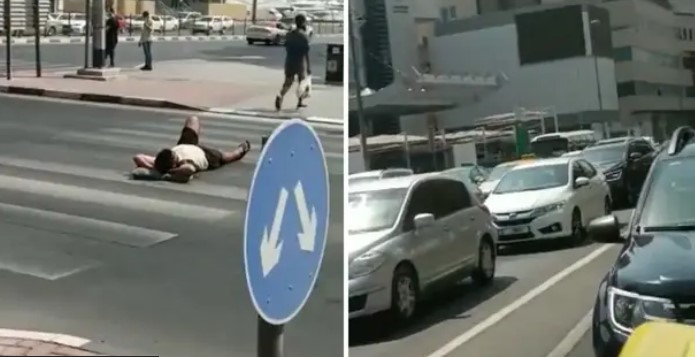 An unknown man was lying on Salah al-Din Street in Al-Muraqabbat, Deira, and he was heard saying that he was no longer afraid of death, whereas he was afraid of dying in a foreign land.

The #Dubai_Police has arrested an Asian man who endangered his life and the lives of others. pic.twitter.com/eX25mvFBG1

“I’m not afraid to die, but I’m afraid to die in a foreign land,” he said in a shocking video, comfortably resting on the road, risking his life and the lives of other people.

A clip of the incident has been posted on several social networks, including Twitter, where it has now gained almost 80,000 views.

TikToker arrested by Dubai Police
On October 4, Dubai police arrested an unnamed man and he was detained on Salah al-Din Street in Al-Muraqabbat district.

Dubai police also tweeted that anyone who commits such acts in the UAE will end up in jail and will also receive a large fine.

“According to Article 399 of the Federal Criminal Code No. 31 of 2021, any person who intentionally committed an act that threatens the life, health and safety of people will be sentenced to imprisonment and a fine,” they wrote on Twitter.

Too skinny because of Tristan’s drama? Kardashian worries about Khloe