Home Tech TikTok More Downloads from Facebook and Messenger in 2019 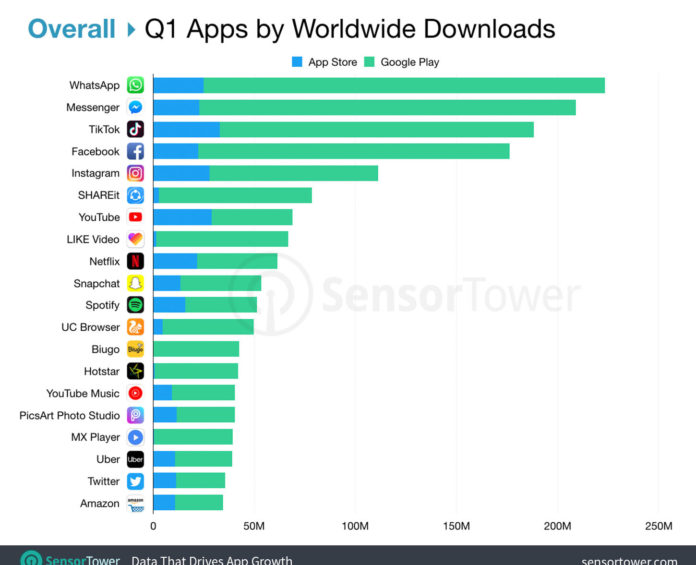 According to the figures announced by Sense Tower, TikTok was downloaded 700 million times in 2019 and managed to leave both Facebook and Messenger behind.

TikTok, one of the fastest rising social media platforms of recent years, reached quite serious download figures in 2019. In this sense, the platform has succeeded to leave Facebook and its other application Messenger behind.

In 2019 the most downloaded application was WhatsApp. The game has been downloaded a total of 850 million times. TikTok took the second place in the list. Both applications benefited from their popularity in India.

The most important reason for TikTok’s success: India
In 2019, 45% of the first TikTok downloads took place in India. This makes approximately 310 million downloads. With just over 700 million downloads, TikTok also benefits from its popularity among young people.

TikTok’s success is even more remarkable considering its problems. It was banned by the US Army and the US Navy. There were also various courts to ban the practice.

The application is considered a security risk by the United States. ByteDance and TikTok are accused of threatening user privacy. The court in California claimed that the application had illegally collected personal and descriptive information and sent it to China.

TikTok is currently blacklisted
Although TikTok had suspicious movements, the application was not blacklisted as we saw in the case of Huawei. Nevertheless, various institutions have banned the installation of the application. The decision was made by the Pentagon.

TikTok may face serious problems if the charges against him continue despite the high number of downloads. After buying the old musical.ly application ByteDance changed its name and made TikTok. The research results were announced by the research company Sensor Tower.