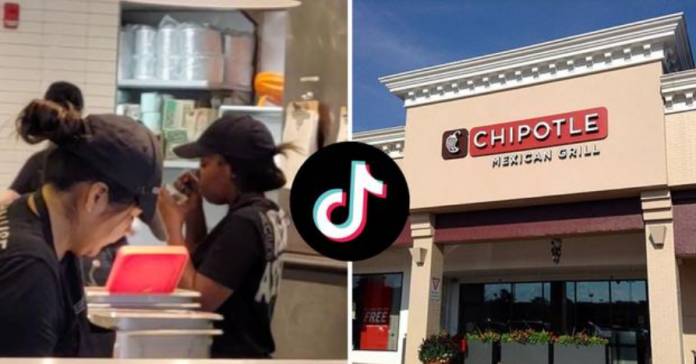 TikToker faced a backlash after ranting about a Chipotle employee who was snacking in the middle of a shift.

This content creator went viral for all the wrong reasons after he filmed and complained about a Chipotle employee eating during her shift.

“Employees eat and walk instead of working! Pathetic! Never even washed my hands or anything. Fucking disgusting!” TikToker wrote the text on top of the video.

In the eight-second video, which has gained more than 343,000 views, you can see employees standing behind the counter, and one of them is eating a small snack.

In the caption to the video, he wrote that one of the employees “also has a bad attitude,” complaining that the other “counts tips” while customers are queuing outside the door.

Employees eating and counting tips infront of customers while there is a line out the door! Never washed her hands or nothing! And has a bad attitude as well! #chipotle #gross #fyp #burrito #mexican #chipotleneedstotrainemployeesbetter

Instead of sympathizing with the content creator, the vast majority of TikTok users sided with the Chipotle employee in the comments and criticized TikToker.

They’re human, bro, they should eat too. Other people also worked there,” one user commented. “Lmao, you’re KAREN,” another joked.

“If you only knew what’s really going on with cooking, that would be the least of your problems,” wrote a third. “Stop complaining about fast food! If you don’t like it, COOK your damn food yourself!” added a fourth user.

“It’s funny how you didn’t attract proper attention, most of us in the comments actually understand her side. Don’t judge,” someone else shared.

Despite the fact that eating at work is often not recommended for food safety reasons, most people protect fast food workers who eat while working.

One user offered an explanation for why one of the workers was counting tips instead of working, as TikToker was ranting about. “There is a person at my job who counts tips and is not responsible for taking orders or fulfilling these orders,” they explained. — I guess that’s what it is.