Home Entertainment Thymesia: how to defeat the sound of the abyss 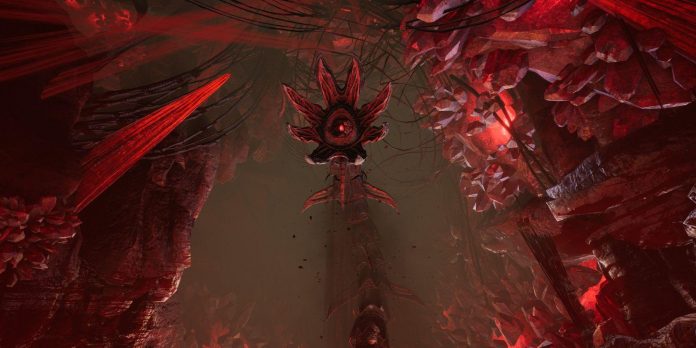 Timesia has many challenging enemies and bosses, with some of the side bosses being the most interesting and monumental fights in the game. These bosses offer the player a variety of loot, including new power-ups, memory shards, and potion enhancement materials. Along with this, these bosses allow players to unlock different endings by combining their cores together. The Sound of the Abyss is a giant worm in the heart of a secret laboratory in the Royal Gardens area. It can be fought only after the player has defeated the Hanged Queen and completed the necessary additional task to finally meet the beast.

The Sound of the Abyss will fight the player in a large arena where a meaty crystal worm strikes from time to time, allowing the player to hit it. In general, this fight is one of the simplest in Timesia, but the Sound of the Abyss causes incredible damage and can easily destroy a player if he does not carefully read his tells.

The sound of the abyss. Phase 1.

The sound of the Abyss, like the first boss of the game Odur, consists of two phases. Each of these phases has its own set of moves.

Attack: The worm will violently shake the cave, causing crystals to fall from the sky. These crystals will be marked with a red circle on the ground. While the crystals are falling, a large red circle will appear where the worm will jump out of the ground, causing damage to everything in the area. Counteraction: this move is telegraphed, and it’s pretty easy to dodge it. Players must avoid the red circles by teasing the worm to hit. This can be done by standing in a place where the crystal will not land until a circle for the worm appears, and then quickly dodging to the side.

Attack: The worm retreats slowly for a moment and then dives towards the player. This attack does a lot of damage. Counteraction: this attack can only be countered by dodging fast enough. If the player can dodge, he will not receive any damage. However, if a player is injured, he must heal with a potion.

Attack: This is the most destructive attack of the Abyss Sound. The worm will lean to one side of the arena, fall down and make sudden movements to the other side of the arena. This attack does a lot of damage and can definitely be the final blow in the run. Counteraction: this attack is actually quite easy to dodge if players can read it in advance. Near the entrance to the arena there are small niches in which players can hide to avoid this attack, which makes it quite insignificant. Players should be careful, as the move resolves quite quickly and can catch players off guard if they are not in a good place when the worm sweeps through the arena.

It is important to note that in phase 1 of the “Sound of the Abyss” battle, damage to the worm can only be inflicted by hitting its weak points located on the sides. They are only available when the worm has fallen, so players should be patient and wait to deal damage. Once the player has exhausted the first health scale of the Sound of the Abyss, he will enter the 2nd phase.

The Sound of the Abyss Phase 2

The second phase of the battle “Sound of the Abyss” is quite useless and does not require much from the player. At this stage, players will do basically the same thing: dodge falling crystals and random large boulders. Once the players hold out long enough, the Sound of the Abyss will collapse again, exposing its core. This will allow the player to execute the worm and end the fight.

Sharp Weapons: This talent is usually useful in most of Timesia. The increased damage from Saber attacks allows players to advance faster on the health scale and, therefore, pass the battle faster. Long Claw: Unlike the Short Claw, investing in a Long Claw allows players to deal higher explosive damage, which is important in such a battle, since the worm will only remain vulnerable for a certain period of time. Blessing: This talent allows players to randomly take less damage. This is a useful talent as it can mitigate incoming damage from boss or crystals. At level 3, the Blessing also allows the potion to be used automatically if the player’s health drops below 1, which will save him from being hit.

Beginners should consider that talents can be swapped at any time, which means that players are free to customize talents according to what they consider appropriate for combat.

Any plague weapon will do in this fight, since most of the battle players will not directly beat the boss. However, a plague weapon that can do enough damage is useful for dealing a lot of damage to the boss while he is vulnerable.